Life lessons from Korea’s oldest female barber : For 60 years, Lee Deok-hun has given haircuts across Seoul

Life lessons from Korea’s oldest female barber : For 60 years, Lee Deok-hun has given haircuts across Seoul 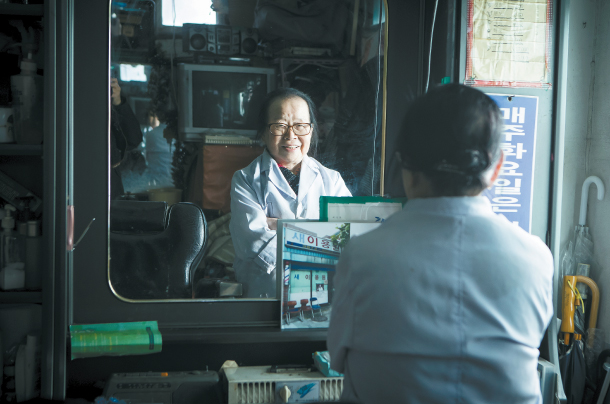 The first female barber in Korea, Lee Deok-hun, 84, stands in front of the mirror as she has for the past 60 years. She said that she is still healthy because she is doing what she loves the most. [KWON HYUK-JAE]

For most of Lee Deok-hun’s life, she has stood in front of a mirror, a comb and scissors in hand, providing haircuts to her customers. She is Korea’s first female barber and one of the oldest working barbers in the country. Having worked since she was a teenager helping out her father in his barber shop, she has done every possible chore needed to run a smooth operation, from cleaning the floor to washing the tools and more.

It has been 60 years since the 84-year-old embarked on her path to become a professional barber. She earned her license in 1958, and has been working since then. Every day, she opens the shop at 9 a.m., whether she has a customer or not. Even if there are people waiting for an early morning cut, Lee won’t get too busy - only two can sit inside the 13-square-meter (140 square feet) shop at a time.

Unlike the name Sae Iyongwon, which translates to New Barbershop, hanging above the window would lead many to believe, the shop is filled with old-time tools including scissors and combs that were used between 30 and 50 years ago. In particular, the hair clippers and a leather belt used for sharpening are from her late father and are over 100 years old.

A photo of Lee is taped to the window along with a description calling her the “Myeongrang Granny barber.”

“I can continue working for more than 100 years,” said Lee when JoongAng Ilbo, an affiliate of Korea JoongAng Daily, visited her shop located in Seongbuk-dong, central Seoul. The following are edited excerpts from an interview with the remarkable barber.

Q. Everything you have is decades-old. How do you feel about being a barber for 60 years?

A. I started with nothing, and it has already been 60 years. I had nothing to rely on in this world, so I only trusted my hands. I just lived today like I did yesterday, and I will live tomorrow like I did today.

After living for about 80 years, I learned that all you need to know in your life is the most basic things, like multiplication rules. If you know the basics and are truthful to yourself, there won’t be any problem. Also, be grateful to your parents, country and the world. I was born in Hongseong [in North Chungcheong,] and moved to the northern part of Manchuria when I was seven. I was punished at school for speaking [Korean], and at that time, I learned what it is like to be a patriot as a child.

Right, you lived through the Japanese colonial period. Tell me more about it.

My father was taken to be a barber for Japanese soldiers. After the liberation, my father founded a barber shop in Sinseol-dong [eastern Seoul] and I also worked at the shop. I did the shampooing and other chores as well. After the [Korean War in 1953,] I worked at a barbershop inside the district office that is located in Euljiro [in central Seoul]. There, one of the workers from the office told me that for the first time [in Korea] there will be a barber’s examination soon, and suggested that I give it a try. So I did. I was one of three women out of the total 69 people who applied for the test, and I was the only woman to pass the test.

You only graduated elementary school. Have you ever wanted to carry on with your studies?

Half of the letters in the textbook on hygiene were hanja [Chinese characters] and I always consulted the Chinese-Korean dictionary if I was lost. I sill remember one of the exam questions [during elementary school], about the duty of tax payment and military service. I also remember that there was a long-answer question about ways to save electricity. [Although I only graduated primary school,] I am thankful to my parents that at least I mastered writing hangul. I even paid my brother to learn the English alphabet. Learning never ends. 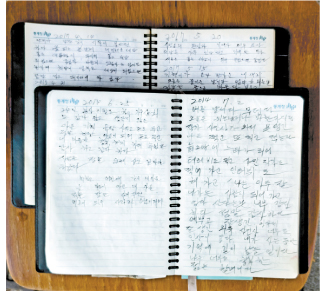 Lee Deok-hun has been keeping a diary since she started looking after her husband, who was severely injured after a car accident, in 2003. [KWON HYUK-JAE]

How do you remember all those things?

I still remember when I was five years old. I was able to jot down the stories my grandfather told, like “Tale of Shim Cheong” or “Tales of Heungbu and Nolbu.” Although I am not good at studying, my memorizing skills are good.

How long have you been in Seongbuk-dong?

I have been at this shop since 2003 and I was at the store across the street for about 28 years, so I have been here for more than 40 years. I moved around 28 times in Seoul, and I’ve recorded all of those moves in my diary.

Do you write in your diary every day?

I started writing in my diary 15 years ago, when my husband got in a car accident. While looking after him for about 200 days, I wrote down some things that I wanted to tell him and now I have about 10 books. When I was a child I enjoyed writing too. I always wrote a memo when ideas popped into my head. And because I don’t have many friends, I have had nobody to talk to and this diary has been my best friend for several years.

Please tell us about your family.

My husband passed away in 2004. He never woke up after he got into a car accident. Actually my father didn’t want me to get married because he wanted to keep me in his barber shop. (Laughs) I got married when I was 26 because I was pregnant, but I had to live with his parents because his business wasn’t successful. So I had to go out and work at the shop again, which I still do. I had four sons, but two of them passed away when they were young. Although my husband wasn’t a caring father, I really liked him. No matter what, he was the best husband for me.

When do you see yourself putting down your scissors?

I don’t know. But one thing for sure is that I never get ill because I am still working. I believe I still have things to do. Like how a machine doesn’t function properly if it is not used for long time, I have to keep working. Although I was a protagonist in a tragedy in the past, I want to be a hero in a comedy from now on. I can confidently say that there is nobody who surpasses my skills as a barber. 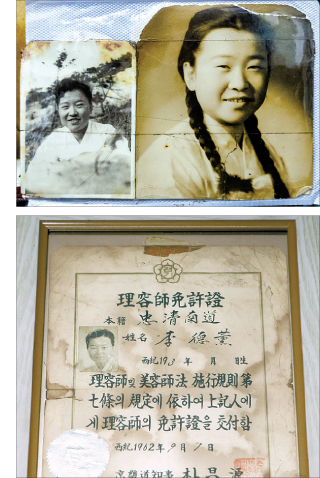 Top: pictures of Lee Deok-hun when she was 26, left, and 19. Above: Lee’s barber’s license, which hangs in the store. [KWON HYUK-JAE]

Of course. I don’t think there is a job that requires this much talent, because we handle the hair that protects the brain, which is one of the most important organs in our body. When doing a haircut, we [barbers] handle about 1.5 million hairs, and approximately 100 hairs grow and fall out of your head every day. For a man’s haircut, it is especially important to have no layers. The hair should be a similar length so that if one combs through, it feels smooth. When cutting one’s beard, it should be only 0.1 millimeter (0.004 of an inch) long. I learned all those skills from the best barbers in Korea.

I wish the world that we’re living in was as organized as the hair you handle.

I don’t think it’s going to be easy because everyone is so greedy. There wouldn’t be car accidents if people followed the traffic rules. If people lived honestly, the world would be much better. And I have learned that you shouldn’t blame others when things go wrong.

Who comes to your mind when you think of your old customers?

I remember the late Kim Du-han [a politician and a boss of a gangster group in Seoul] and the late Chung Ju-yung [the founder of Hyundai Group]. When Mr. Chung was younger, his office was at the Oein apartment [which was demolished in 1994] near Namsan [central Seoul] and I worked at a barber shop nearby the apartment. Anyway, I am always thankful to my visitors. Like the fish can’t live without water, I can’t live without this work.