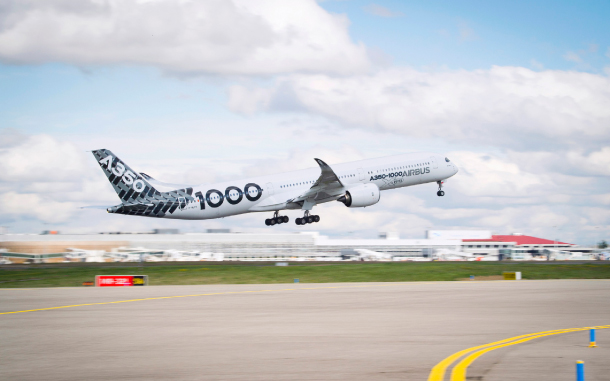 The A350-1000 from Airbus is 7 meters longer than its predecessor A350-900, meaning it can accommodate about 40 more seats, according to the company. [AIRBUS]

Airbus unveiled the newest member of its extra-wide-body A350 family - planes typically used on long-haul flights - to the Korean market on Tuesday.

Prior to the European aircraft manufacturer’s first delivery of the A350-1000 to Qatar Airways next month, the plane has been on a three-week demonstration tour to major cities in the Asia-Pacific and Middle Eastern markets.

The showcase A350-1000 flew into Gimpo International Airport in Seoul on Tuesday from Hong Kong. The Korean capital was among 12 destinations, including cities like Singapore, Tokyo and Doha in Qatar.

Although the new plane shares many similarities with its predecessor A350-900 - they look similar in appearance and run on similar systems - it also stands out for its longer fuselage and trailing edge on the wings.

The fuselage is roughly 7 meters (23 feet) longer than that of its predecessor, contributing to 40 percent more cabin space in first and business class, according to the company. The plane is able to accommodate about 40 more seats in a typical three-class configuration than the A350-900, with a total capacity of 366.

The A350-1000 has a flying range of about 14,800 kilometers (9,196 miles), which means it can carry passengers from Seoul to destinations in Europe and North America nonstop, the company said.

Compared to its rival Boeing 777-300ER, the new Airbus is 25 percent more fuel efficient, the company said, crediting its use of lighter materials, and requires less maintenance.

“The A350-1000 is perfectly tailored for some of the busiest long-haul routes,” Airbus said in a statement.

So far, 11 airlines have placed orders for 169 planes. Asiana Airlines is among them.

Last April, the airline bought its first A350-900, the preceding model, and currently operates four of them. Asiana is the only airline in Korea with A350 planes in its fleet.

“Over the last 10 years, air traffic in [Korea] has doubled, and it is one of the most dynamic markets in the world,” said Francois Obe, marketing director for the new A350-1000, during a press briefing on Tuesday in Seoul. “The size category of the A350 XWB is a perfect fit,” referring to the extra wide body of the Airbus 350 family.

Obe stressed that large planes like the A350 models will be a necessary selection for Korea as the number of flights to Europe and North America increases and Korea grows to become one of the major transfer hubs in Asia.

According to Obe, there has been growing demand for extra-wide-body planes in the Asian market. Forecasts show about 40 percent of the world’s air traffic will come from Asia in the next 20 years.