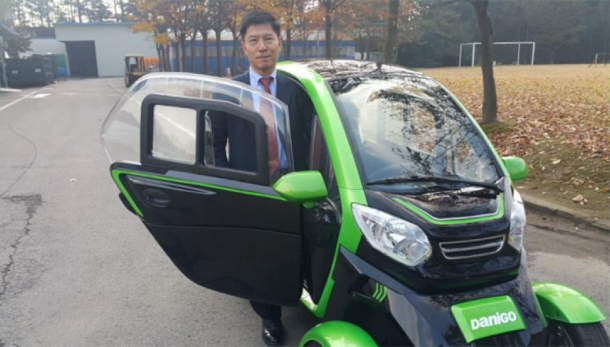 Oh Choung-kee, CEO of the Daechang Motors, stands by a Danigo, a compact electric vehicle with a 100-kilometer (62-mile) range per charge. [DAECHANG MOTORS]

Daechang Motors, which produces a two-passenger electric vehicle called the Danigo, hit a milestone. In the month of January, the carmaker received 1,000 advance orders for the Danigos, half its 2,000 target for the whole year.

A couple of thousand orders is a big achievement for an eight-year old company with only 42 employees located in the small town of Jincheon in North Chungcheong.

The company now hopes its sales will rise six-fold this year to 3.6 billion won ($3.35 million) compared to last year’s 6 million.

The Danigo has a range of 100 kilometers (62.1 miles) per change, which takes up to 3 hours and 30 minutes, and sells for 15 million won ($13,900). If a customer is eligible for the maximum level of government subsidies, the price can fall to 5 million won.

While Daechang Motors has nothing like the brand recognition of Hyundai and Kia, one of its products is an everyday sight in Korean cities: four-wheel motorized yogurt-delivery carts.

The company has supplied 4,200 carts to Korea Yakult, a uniquely Korean sight, especially with a uniformed women standing at the steering wheel.

The JoongAng Ilbo met with Oh Joung-kee, Daechang Motors’ CEO, at his office in Jincheon and asked him about his company and its ambitions.

“When I tell people I am the chairman of Daechang Motors, many scratch their heads,” the 58-year-old entrepreneur said. “But when I say we make Yakult carts, they all know that product and become instantly interested in Daechang.” 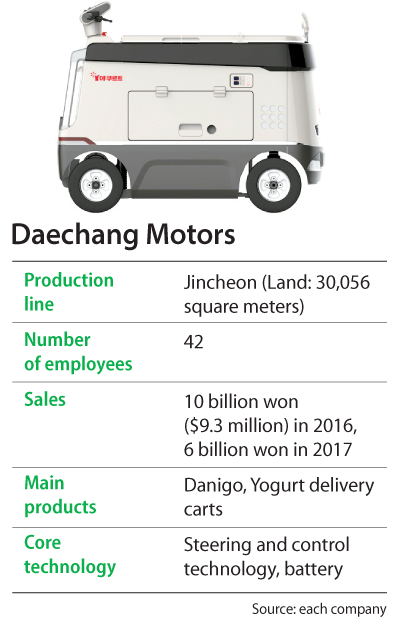 Before Daechang, Oh had already tested his entrepreneurship by founding an LCD-panel maker called Dectron in 1995.

It had annual sales of more than 100 billion won at one point and was listed on the secondary Kosdaq in 2001.

But Oh sold his stakes in the company in 2006 and moved into the uncharted territory of electric vehicles. He says he aspired to be a “hidden champion” in the auto industry.

It didn’t take long for him to discover that while it was difficult to produce a car, it was even harder to get approval for a new type of vehicle.

“Anyone who knew the workings of the auto industry opposed my business plan,” Oh recalls. “I think I was able to make a bold move because I knew nothing about the industry. Had I known the difficulties that lay ahead, I may not have tried.”

Getting approval for his vehicles was the hardest part. For the yogurt carts, it tested prototypes on the streets of Yeongdo in Busan, notorious for its winding streets. They were approved in 2014.

For Danigo, Oh had to throw its electric motor into a fire and drop it from more than 10 meters (33 feet) off the ground to pass tests.

“Stacks of certification-related documents piled up so high they almost touched the ceiling,” he said. “Many tasks required for certification were really complicated for a small company like Daechang to handle.”

But approval for the Danigo came last year.

Oh is trying to win a bid to supply electric vehicles to Korea Post, which will deploy 1,000 green vehicles for its postmen.

“50 Danigos have been supplied for trial service and I am confident our product will be selected,” he said.