Gwanghwamun looks for a sign: After year of research, historic gate in central Seoul will get a new signboard

Gwanghwamun looks for a sign: After year of research, historic gate in central Seoul will get a new signboard 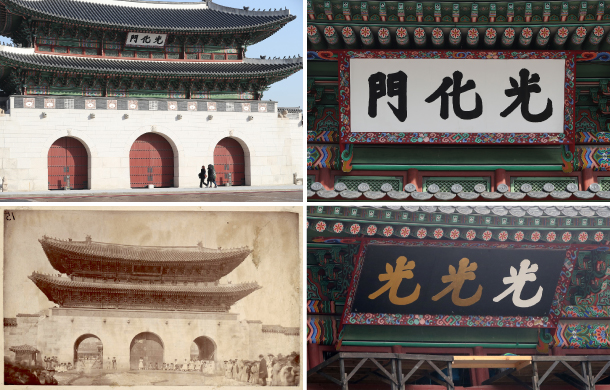 The current version of the Gwanghwamun signboard is white with black letters, top left and right. A photograph taken in 1893 shows that the old version is black with gold letters, bottom left. The Cultural Heritage Foundation testing which colors best match the original, bottom right. [YONHAP]


After a series of investigations carried out over a year, the Cultural Heritage Administration (CHA) concluded on Jan. 30 that the current signboard on Gwanghwamun, the front gate of Gyeongbok Palace in central Seoul, is colored differently from the signboard that hung during the Joseon era (1392-1910), and it will start creating a new version immediately.

The current signboard, with black letters reading “Gwanghwamun” in Chinese characters on a white background, was hung in 2010 after a renovation around the gate and the palace was completed. The new version, based on thorough research, will have gold gilded letters against a black background.

“The Cultural Heritage Foundation has concluded that the original Gwanghwamun signboard, produced in the later years of King Gojong, had gold gilded letters on a black background,” said the organization.

However, a black-and-white photograph of Gwanghwamun in 1893 stored at the Smithsonian Institution in the United States was found in February 2016, firing up a renewed discussion on the true appearance of the signboard.

The photo, which is believed to have been taken in the afternoon in September 1893, shows the palace gate with a dark signboard and bright letters.

Since the discovery, the heritage organization has initiated series of experiments to determine the true colors of the Gwanghwamun signboard. In a joint effort with Chung Ang University, it created eight boards to work on: four signboards with different color backgrounds - white, black, black lacquer and cobalt - that each had five different colored letters - white, black, gold, gilt and cobalt - painted on them. The four other signboards had the same colors, but had been made to look aged. Each were put up on the gate and photographed in black and white to compare with the old pictures.

The shoot took place during various weather conditions and the final photographs were compared with the one found at the Smithsonian Institute.

Experts from various fields took part in analyzing all kinds of variables - from the length of the shadow in the photo to the possible contrast with the color of the gate’s roof.

The cultural administration will put up a temporary signboard sometime this year, painted with both modern materials and traditional paint to see which is more adequate for dancheong, a traditional method of painting on wood.

After the trial period is complete, the final signboard will be put up sometime in the first half of next year.

“To choose between traditional dancheong and modern dancheong, we’ll be putting up both methods and monitoring them until October,” said a representative from CHA in a press briefing on Tuesday.

“Afterwards, we’ll create the Gwanghwamun signboard using the most appropriate method. The Cultural Heritage Administration will maintain its efforts to renovate our precious cultural heritage that were damaged and destroyed during Japanese Colonial Rule (1910-1945), and continue our research work with the latest technology for future generations.”