‘Me Too’ prosecutor goes public with groping

‘Me Too’ prosecutor goes public with groping 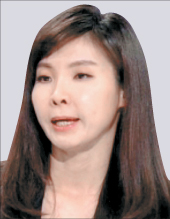 A prosecutor in Tongyeong, South Gyeongsang, said Monday that she was groped by a former senior prosecutor at a funeral in 2010, and her career suffered because she complained.

Seo Ji-hyeon, a 45-year-old prosecutor at the Tongyeong branch of the Changwon District Public Prosecutors’ Office, posted her claims on the prosecution’s internal forum, which is named “e-pros,” on Monday, accusing a former prosecutor with the Justice Ministry of sexually molesting her at the funeral of the father of a colleague on Oct. 30, 2010.

The alleged perpetrator is Ahn Tae-geun, 52, a former deputy minister for criminal affairs of the Ministry of Justice who was sacked from the post last June after a corruption scandal.

Seo, who was working at the Seoul Northern District Prosecutors’ Office in 2010, said that she attended the funeral of a colleague’s father. She was told by a senior colleague to sit next to Ahn, a director general for policy planning at the Ministry of Justice, at a dinner table in a funeral hall.

Ahn, who had accompanied the justice minister to the funeral, allegedly wrapped his arm around her waist and groped her buttocks “for a considerable amount of time,” recounted Seo in an interview with JTBC Newsroom Monday evening. She said she tried to avoid Ahn’s hand but did not openly protest because they were surrounded by so many people - including the justice minister.

She said in the interview that the sexual assault was conducted in the open, “but nobody stopped him or acknowledged what was happening” to the point she had to question whether she was “hallucinating.”

The justice minister at the time was Lee Kwi-nam. Seo said she locked herself in the bathroom because of the shock and only thought to leave after recalling she had a child waiting at home.

Seo wrote on the prosecution intranet on Monday that she had immediately raised the issue with her superiors, who tried to settle the case by getting an apology from Ahn. But she never heard from Ahn.

Instead, she was criticized on how she handled numerous cases in an audit that led to a disciplinary warning by the prosecutor general. Then she was unexpectedly transferred from Seoul to an unwanted regional posting in Tongyeong, a fishing village.

She blamed the trauma of the incident for a miscarriage.

Later, Seo claimed, the assault by Ahn had been covered up by the then-deputy minister for criminal affairs at the Justice Ministry, who was Rep. Choi Gyo-il, a sitting lawmaker of the main opposition Liberty Korea Party and former chief of the Seoul Central District Prosecutors’ Office.

Seo told JTBC that she was assigned to Tongyeong in August 2015, took a year of maternity leave and began working there in August 2016.

Because she had some 15 years of experience and has been recognized for her work as prosecutor - including two awards from the justice minister - she found her transfer difficult to accept. She described in the interview that the job in the Tongyeong branch would normally be given to a prosecutor with three or four years experience. Another post in Tongyeong was more suitable for someone with her experience and it is held by a more junior prosecutor than herself.

Seo admitted she recently contacted the senior prosecutor to whom she initially reported the incident and he said he didn’t remember it.

“The environment in 2010 was different from now, and it was difficult to raise the issue of sexual assault,” said Seo in the JTBC interview.

Seo’s going public is being called a Korean version of the global “Me Too” movement, the worldwide backlash against sexual assault and harassment, especially in the workplace.

Seo said she has heard encouraging words from both female and male colleagues, who tell her to “have strength.”

When contacted by the media, Ahn said: “It happened so long ago, and I had drank a lot before, so I don’t remember it, but if such an act happened, then I sincerely apologize.”

It is a rare move for a female prosecutor to complain of sexual assault, and Seo said she decided to go on air with her story so that people would believe it.

She was working in a culture in which women are told, “Female prosecutors hold back male prosecutors.” They are described as kkot baem (flower snakes), gold-digger female con artists who exploit men with sexual appeal.

“I think [Ahn] saying that he is not able to remember means that he cannot deny the fact,” Seo told JTBC. She admitted it will be hard to prove that her transfer was payback for squealing because prosecution posts are assigned “very secretively.”

“I am the victim of a sexual assault but for nearly eight years, I thought this happened to me because I did something wrong, blaming myself,” said Seo. “I want to tell victims of sexual assault, it’s not your fault. It took me eight years to realize this.”

Rep. Choi in a statement Tuesday denied “any knowledge of the case.” He went onto say he “does not know Prosecutor Seo at all” and that Seo had been transferred from the Seoul Northern District to a Yeoju post, in Gyeonggi, in February 2011. “I was not at the site of the incident, nor have I called or communicated with Seo since then on this case.”

Amid demands for a probe into Seo’s case, including thousands of signatories overnight on an online petition to the Blue House, Prosecutor General Moon Moo-il told reporters Tuesday that he takes the issue “seriously” and “plans to conduct a thorough fact-finding probe and implement appropriate measures following the results.”