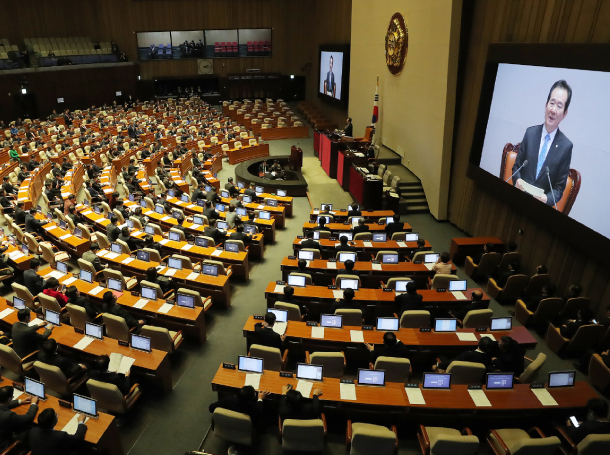 Lawmakers sit in the main conference hall of the National Assembly on Tuesday as a monthlong extraordinary parliamentary session kicks off. [YONHAP]

A monthlong extraordinary parliamentary session is set to begin Tuesday with rival parties likely to wrangle over a series of pending bills, a constitutional revision and other political issues.

The parties are expected to first pass a set of bills aimed at bolstering the country’s firefighting capabilities in the wake of last week’s hospital fire in the southeastern city of Miryang, which killed 39 people.

Policy speeches by the leaders of three major parties are set for Wednesday through Friday, while the parliamentary interpellation of the government will take place from Feb. 5-7. The legislature will hold plenary sessions on Feb. 20 and 28 to pass pending bills.

During the session, the ruling Democratic Party hopes to pass an array of bills designed to enhance people’s livelihoods, including those concerning the protection of small enterprises and merchants from unfair business practices.

Woo Won-shik, its floor leader, said that the party would also seek “cooperative politics” with the opposition bloc to craft measures to enhance public safety.

“During the extraordinary session, we will do our best to ensure cooperation between the ruling and opposition parties so as to lay the groundwork for a safer Republic of Korea,” he said.

The main opposition Liberty Korea Party (LKP) and People’s Party are poised to use the session to pass a set of long-stalled bills aimed at creating regulation-free zones to foster new growth engines and developing service industries.

During the session, the rewrite of the decades-old Constitution is likely to put the rival parties on a collision course.

Despite a year of parliamentary discussions, they have yet to build consensus over when and how to revise the basic law.

Earlier this month, President Moon Jae-in called on the parties to reach an agreement on the revision by late February, table their revision motion in March and agree to hold a plebiscite on the issue at the same time as the June local elections. But the LKP disagrees with the proposed schedule.

A constitutional amendment requires approval from two-thirds of all 299 lawmakers in the unicameral parliament and a majority of voters in a referendum.

Another bone of contention is the government’s push to reform powerful state organizations, such as the prosecution and spy agency, which have long been accused of political bias, power abuse and corruption. Rival parties remain apart over how to revamp them.