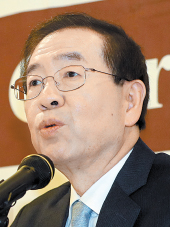 North Korean taekwondo players will hold a performance at Seoul City Hall during their visit to the South for the PyeongChang Winter Olympics.

“There are North Korean artistes and athletes who will be traveling through the city, including members of the Samjiyon Orchestra and North Korean taekwondo athletes,” Seoul Mayor Park Won-soon said during a press conference at the Korea Press Center with foreign correspondents on Tuesday. “The taekwondo players will perform at Seoul City Hall and the Seoul city government will do all it can to ensure that it goes safely and peacefully.”

He added, “The date for the performance has been set, but we will be revealing it later. Seoul hopes to support the North Korean visitors and their schedules here.”

The mayor added that the PyeongChang Winter Olympics, starting on Feb. 9 at venues in Gangwon that are located some 130 to 170 kilometers (80 to 105 miles) from central Seoul, could give momentum for Seoul and Tokyo to improve bilateral relations.

“I think local governments could really remain unattached to or even transcend some political attachments or policies of central governments,” Park said. “Since Prime Minister Shinzo Abe is visiting the country for the Olympics, I would also like to extend an invitation to Tokyo Mayor Yuriko Koike to visit Seoul and Pyeongchang [County] during the Games.”

He continued, “And I hope that this will be an opportunity for the two cities to bridge ties, so that Seoul may also participate in and support the 2020 Summer Olympics in Tokyo.”

In answering a Japanese reporter’s question about so-called comfort women, or victims of Japanese wartime sexual slavery, Park said, “With the new Korean administration in place, I hope that the two countries can find ways to agree on the past and chart the future together.

“When I was involved in civic group activities years ago, I remember meeting many locals in Japan who regretted what took place in the past and who volunteered to help the victims in some way. Instead of escalating the issue, we should find points where the two countries can agree.”

Park said the Seoul Metropolitan Government will also do its best to help foreign visitors and locals enjoy clean air during the Games.

“If the air pollution hits unhealthy levels during the Olympics, of course we will launch the emergency air pollution reduction system once more, which includes free public transportation,” Park said. “But we will need to supplement it with more effective policies like a ban on vehicles based on license plate numbers, which would apply to all citizens in the city.

“The city has conveyed this idea to the minister of environment and to the prime minister and they responded positively, so I think the all-citizen ban within the city and surrounding areas may take place during bad air days in the future.”