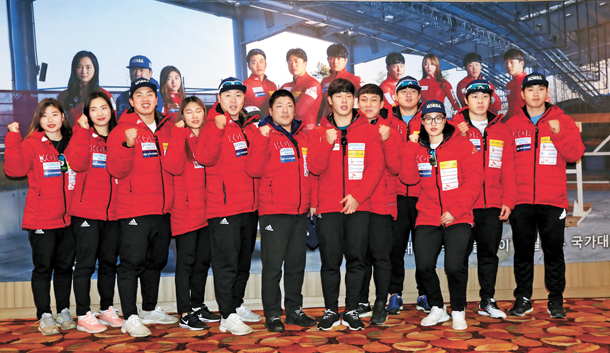 The Korean men and women’s national skeleton and bobsled team pose for a photo during a media day event at Yongpyong Resort in Pyeongchang County, Gangwon, on Wednesday. [YONHAP]

Korean national bobsled and skeleton head coach Lee Yong said Wednesday that his side aims to collect one gold and one bronze medal in bobsled events at the PyeongChang Olympics.

Lee said the national team has finished its final driving training at the Olympic Sliding Centre in Pyeongchang, some 180 kilometers (112 miles) east of Seoul, and will now move to Jincheon Training Center in Jincheon, North Chungcheong, to work on improving the athletes’ physical and mental strength.

“From tomorrow to Feb. 12, we’ll be at Jincheon and will focus on other types of training,” Lee said at a media event at Yongpyong Resort in Pyeongchang. “We’re now less than 10 days away from the Olympic Games, and there’s no need to hide. We are looking for two medals from two-man bobsled and four-man bobsled.”

Koreans will compete in two-man bobsled, four-man bobsled and two-woman bobsled events. Lee said the duo of Won Yun-jong and Seo Young-woo, who topped 2015-16 season world rankings, will go for the gold medal, while four-man bobsled team can earn an Olympic medal of any color.

“Our four-man bobsled team has no problem in their driving skills,” he said. “If their start time falls within 0.03 second to Germans’, I think they can look for a medal.”

Lee said Korean athletes will try to take advantage of a home track the best they can. He said his athletes should have a good understanding of the Olympic track by now.

“The condition of the ice surface is different from when we had training in October,” he said. “Now, you can see that the weather here is really cold.”

All 16 International Bobsled Skeleton Federation (IBSF)-approved tracks in the world have different course settings, meaning those who’ve raced many times on the Olympic track at PyeongChang will have a better chance of performing well at the upcoming games.

Lee said his bobsled team has raced more than 450 times on the Olympic track.

“We have four races at the Olympics and I think the home advantage means it decreases your chances of making mistakes,” he said. “Compared to other tracks, the Pyeongchang track is narrower and each section is not as long.”

For two-man bobsled, Won, the pilot, and Seo, his brakeman, were at the top of the world two years ago, but the duo have since suffered up-and-down seasons, and they’re now at No. 21.

Lee said he felt pressure and agony during some difficult times, but now he is confident that the tandem can deliver surprising results. Since December, Won and Seo have been training only at the Olympic Sliding Centre, instead of competing IBSF World Cups.

“They had injury issues and starting problems,” he said. “But in recent practice runs, they showed unexpected driving times and pushes, which also surprised me. I think they’re going to show distinguishable performances from the first two races.”

Lee said he doesn’t really care about the issue, saying that his bobsled team is ready.

“I hope people don’t focus on the course, but look at how much our athletes can push quickly and drive smoothly,” he said.

In addition to the bobsled team, Lee also talked about world No. 1 skeleton racer Yun Sung-bin.

At the PyeongChang Olympics, Yun will go up against rivals like Germany’s Axel Jungk, who finished second in the world rankings, and Latvia’s Dukurs brothers - Tommas Dukurs and Martins Dukurs.

Tommas finished third in this season’s rankings, while Martins, considered by many to be the greatest skeleton slider in history with eight consecutive overall World Cup titles, finished fourth. Martins has settled for silver in each of the past two Winter Games.

Lee said he personally wanted Yun to finish second behind Martins Dukurs in the rankings so that he could have a challenger’s mindset until the end and keep his intensity. But after Yun’s last two World Cups, Lee now thinks differently.

“With Yun taking the No. 1 position, I thought he would have pressure, but after completing his races in Altenberg and St. Mortiz, I changed my mind,” he said. “I just told him, ‘Don’t think about Dukurs or the other sliders. Just do your race.’”

Having set such high expectations from his success this season, Yun said during the media day that he doesn’t feel any Olympic pressure ahead of the quadrennial event.

“Some people say I’m too cocky, but I don’t know about that,” Yun said during a media day event at Yongpyong Resort in Pyeongchang. “To me, it feels like I’m going to compete at a World Cup event.