While a number of LPGA Tour players have already started their season on the LPGA Tour’s Puresilk Bahamas Classic last weekend, the 2017 super rookie Park Sung-hyun has been quietly preparing in Orlando, Florida, aiming for an even greater achievement this season. 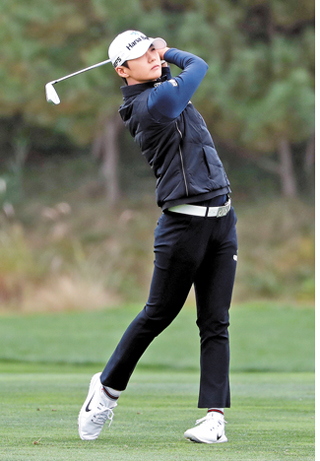 Having spent Christmas for the first time in the United States, Park has been focusing on sharpening her shots.

“There’s this feeling I have when I hit [good] shots, but I still don’t have that yet,” Park said. “I’m training, focusing on finding that feeling in the remaining time.”

Despite being a rookie, Park left an impression on the LPGA Tour by winning the U.S. Women’s Open and Canadian Pacific Women’s Open. Park also became the first player in 39 years, since Nancy Lopez, to win both the Player of the Year and Rookie of the Year awards.

“After the season finale, I went on a trip with my friends,” Park said. “It was such a memorable trip because I went with my friends. After that, I stayed in Korea for about three weeks and spent time with my family.”


Now that she’s back to training, she says she feels the pressure after such a successful season. “I do feel a little nervous about the new season,” Park said. “No matter how hard I work, I question if I’m really working hard enough. Since I played well last season, I think the expectations are higher.”

Since not many players are able to continue their success in a second season, a phenomenon known as the “second year jinx,” fans worry that the jinx may also affect Park. Even Chun In-gee, who won the 2016 LPGA Tour’s Rookie of the Year award, spent her second season without a single victory, having five runner-up finishes. Park may have improved in course management during her rookie season, but this year, she’s facing another challenge - overcoming the high expectations set by fans.

“Since I’ve won two tournaments in 2017, I want to win three tournaments this year,” Park said. “And I’ve made winning the Vare Trophy a goal as well because that was the award I wanted to win the most last season.” 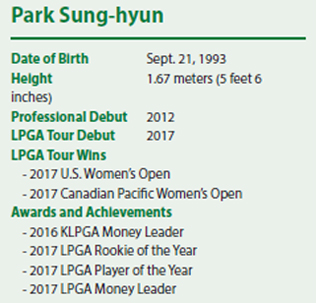 “Probably, the most important thing at the first tournament will be putting,” Park said. “In the remaining time, I’ll have to find my feel for putting. I’ll take longer to train than in any other year and work harder. I’ll have another great season, just as my fans expect me to do.”

Park will start her season at Honda LPGA Thailand, which will run from Feb. 22 to 25. But she’s already off to a great start, having been selected as the 2017 United States Sports Academy’s female athlete of the year on Jan. 23.

In the USSA’s article announcing Park as the Female Athlete of the Years, she was described as, “Rookie LPGA golfer Park of the Republic of Korea, won the LPGA’s money title, shared LPGA Player of the Year honors with fellow South Korean golfer So Yeon Ryu and won the LPGA Rookie of the Year award.”

This marks the third time a Korean athlete has won the award, as Kim Yuna won it in 2010 and 2013. Interestingly, despite this award, Park didn’t win the Golf Writers Association of America (GWAA) female Player of the Year award, announced on Jan. 5.

Though Park had better results than Thompson, Thompson won the votes of golf writers.

But winning the USSA Female Athlete of the Year award is arguably a more meaningful achievement, as it compares all female athletes in any sport.