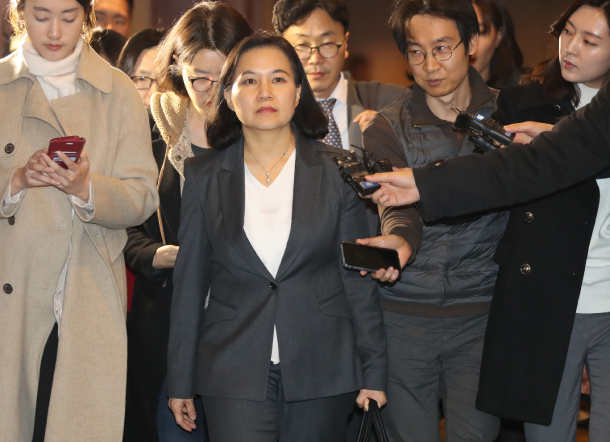 Korea and the United States began a second round of talks on Wednesday to amend their free trade agreement, amid rising tension between the two nations over Washington slapping steep tariffs on washing machines and solar panels.

The two-day talks come a week after U.S. President Donald Trump signed safeguard tariffs on foreign washers and solar panels, including those from Korea, saying the measures would protect American jobs.

Seoul is expected to raise the topic of U.S. safeguard measures at the negotiating table, as it is seeking consultations with Washington over the heavy duties, which are set to take effect on Feb. 7.

“As we broadly exchanged matters of concern during the last talk, [the two sides] are expected to have more detailed discussions on each side’s main interests at this meeting,” Yoo Myung-hee, director general of the Korean Trade Ministry’s trade policy bureau, told reporters before meeting her U.S. counterpart, Assistant Trade Representative Michael Beeman. “Trade remedies are important for us, so we will raise the issue.”

Unless the matter is settled through bilateral consultations, Korea’s Trade Ministry said it would file a suit with the World Trade Organization and seek compensation for damages suffered by Korean companies.

Following the first talk held in Washington on Jan. 5, Trade Minister Kim Hyun-chong said he expects growing pressure from the United States in upcoming negotiations. The Trump administration wants a quick fix to its trade pact with Korea amid frustration over the slow pace of talks to revamp the North American Free Trade Agreement.

Kim, who served on the WTO’s appellate body, said Seoul would seek to revise the investor-state dispute settlement clause and explore ways to protect the agricultural industry, which has suffered since implementation of the free trade agreement.

With the dispute settlement provision, investors can sue countries for alleged discriminatory practices through international arbitration. Local experts have expressed concern that large multinationals could exploit the clause, leading to the infringement of Korea’s judicial sovereignty.

Seoul officials also anticipate increased pressure on the auto industry, which accounts for about 80 percent of Korea’s trade surplus with the United States. Industry sources said the percentage of American auto parts used by Korean carmakers could be an issue.