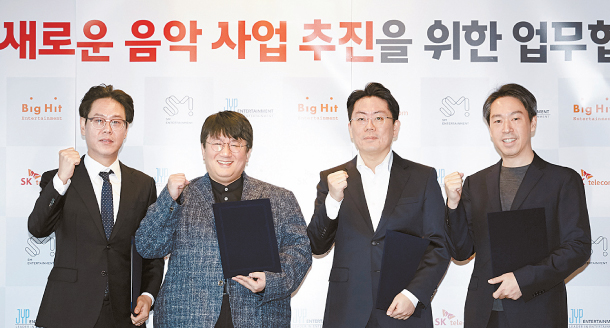 SK Telecom hopes to differentiate the new platform by utilizing a series of top-notch information communications technologies such as artificial intelligence, the high-speed 5G network and blockchain.

AI will be used to offer more customized content for consumers. Using data analysis, the service will be able to offer customized music selections for listeners based on their previous choices. The platform will be connected to SK Telecom’s smart speaker Nugu, allowing users to access the streaming service via voice command.

Currently, Nugu is connected to Melon. When the new service is launched the two platforms will both be available on the speaker, allowing users to choose which service they would prefer to subscribe to.

The carrier is looking to augmented reality and virtual reality content as well to differentiate its service.

Blockchain technology will be used to better protect the copyright of content creators. While such technology has not yet been adopted by major music streaming platforms, according to the carrier, it could help content creators and platform operators to better keep track of where content is sold and used. SK Telecom is still reviewing how exactly it will use blockchain for the music streaming platform.

SK Telecom’s entry into the music industry comes five years after it sold Melon to Kakao, the operator of mobile chat app KakaoTalk, in 2013. The move follows portal giant Naver’s partnership with YG Entertainment and the partnership between KT and LG U+ to develop Genie Music.

Accessing music and entertainment content has quickly become one of the most common uses for AI-powered devices like smart speakers and industry insiders say that Korea’s largest mobile carrier has been keen to move into that area to take a lead in the ICT market.