‘What good is it to inspect business sites here now?’

‘What good is it to inspect business sites here now?’ 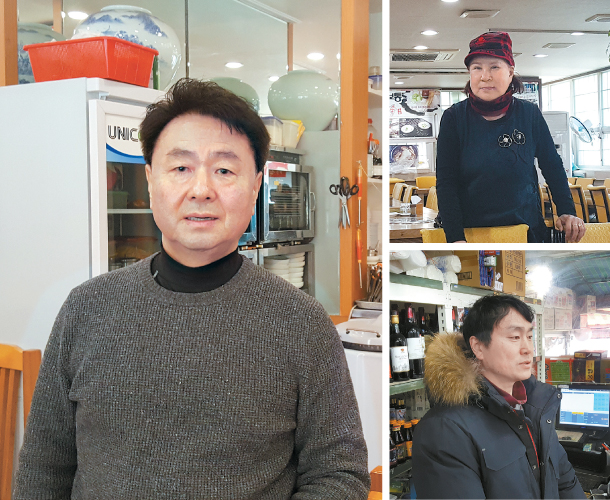 President Moon Jae-in has ordered policymakers to check how the market is responding to the administration’s minimum wage hike. Since Jan. 18, ministers have been taking turns performing that task.

The reporter also paid a visit to streets filled with restaurants in Sindang-dong in Jung District, central Seoul, and Sillim-dong in Gwanak District, southern Seoul, where Moon’s policy chief, Jang Ha-sung, and Hong Jang-pyo, senior presidential secretary for economic affairs inspected on duty. People in the area had already expressed criticism of Moon’s policy, calling it an “armchair theory.”

What follow is an excerpt of interviews with businesses suffering from the minimum wage increase in Sindang-dong and Sillim-dong.
First, the reporter met with 64-year-old Kim Bok-yeop, who recently had to fire two staff members from his cold noodle restaurant in Sindang-dong.

Q. I recall Sindang-dong as a busy place for restaurants. But today, the streets seem rather deserted. Did you tell Moon’s policy chief about this overall atmosphere?

A. We told Hong and Kim Young-rok, minister of Agriculture, Food and Rural Affairs, that we are fond of the original intention of the minimum wage raise and welcome policy chiefs actually being on site to hear our voices. But I also told them the reality is very different. If labor costs increase when the economy is not very good, small businesses cannot bear it.

Why is business so difficult?

It’s 1 p.m. now. At this time of the day, there should be customers. But you see the area is desolate. Business here is just very bad. Restaurants on other street corners are in similar straits. Office workers come in to eat at around 12 to 1 p.m., but that’s really all we have.

From when did this happen?

The situation got worse from last year, when the Kim Young-ran law, or antigraft law, was enforced. We are not fancy restaurants directly impacted by the law, but we are still influenced by it. Business is even worse at night. Younger workers tend to avoid dinner meetings compared to older generations.

So did you have to cut down on staff?

Yes. I fired one staff member at the end of last year and another at the beginning of this year.

Was that because of the labor cost?

Well, that is the foremost reason. Revenue stays the same but we have to pay commission to card companies and heavy taxes. We still can’t raise the prices on our menus.

The cost of food ingredients and fuel, on the other hand, have been on a constant rise. Rent for this space has been increasing 10 percent every two years. If we have to bear an increase labor cost, as well, we are left with no solution but to cut staff.

The government has introduced a job stability fund to provide 130,000 won [$122] per worker. Does that not help?

We welcome the plan. However, that’s still paid out of national taxes. If the government has that much money to support businesses, I’d rather suggest it help disadvantaged groups in society. Our staff takes about 1.8 million won a month, and they don’t have a big problem with the income they earn.

I didn’t. I have already let go of two workers out of five. We have been trying hard to carry our business on… if the situation becomes worse in the future, I will have to work more with my wife. The government’s policy seems to increase unemployment, not help people find jobs. I think this is because politicians have vowed to execute unrealistic pledges to earn more votes.

How are you managing your business after cutting staff?

My wife is coming to work after cutting one at the end of last year. My wife takes charge of serving food. I work more at the restaurant, as well. I have also told the remaining employees that if business deteriorates, I have no choice but let them go. I encouraged them to tighten their belts with us.

What do you recommend the government do?

Rather than pushing through with the pledges the administration vowed during campaigns, it should compliment on or at least slow down their execution if the pledge seems to correspond with reality.

The reporter then met with Seo Jung-ok, who sells chicken boiled with rice, or baeksuk, in Sindang-dong.

I heard you’ve been selling baeksuk for 23 years in this shop. How did Hong and Minister Kim visit this shop?

Some person asked me if they could visit the shop. I told the ministers my difficulties. I told them business nowadays is worse than in 1997, when there was a foreign exchange crisis in Korea. Compared to three years ago, I only earn one-third the revenue, sometimes even one-fifth. When avian influenza sweeps the nation, the revenue slump is even worse.

So how has the situation impacted your sales?

How about the job stability fund?

I don’t think anybody would subscribe to employment insurance just to get a 130,000 won benefit. Subscribers need to bear some cost, as well. Ministers don’t know about this kind of situation.

Why do you think this happened?

It’s all because the decisions were armchair decisions. What good is it to inspect business sites here now? If the situation gets worse, I am planning to run this store two hours at peak lunch time and three hours at dinner time together with my husband alone.

The reporter then met with Oh Kwang-seok, a 45-year-old shop operator in Sillim-dong.

Moon’s policy chief visited Sillim-dong. What did you talk about?

I told him there are too many convenience stores in the streets and that there is a high burden caused by card commissions and rent. The policy directors said they will limit rent hikes to 5 percent. They also gave me a promotional pamphlet on the job stability fund, which provides 130,000 won per employee, and asked me to spread the word to neighbors.

What do you think about the impact of the job stability fund?

Well, you need to be a subscriber to four basic social insurance programs, including employment insurance. However, for those earning a small wage, it’s hard to pay for the insurance premium. Right now, the government is offering to give out funds, but no one knows if that support will stop a year later. I asked the policy directors who visited and they said the detailed terms of the plan have to be approved by the National Assembly. The plan is not elaborate.

Do you have any plans to cut down on staff?

I am already running the mart with minimum labor. Business is bad. I have lost about 30 percent of sales recently. The situation is very serious. As delivery service gets better, consumers have shifted their consumption patterns. Only acquainted customers visit the store to buy things.

Is there anything you want to suggest to the government?

The government lacks practicality. They should build up policies after considering the smallest details.