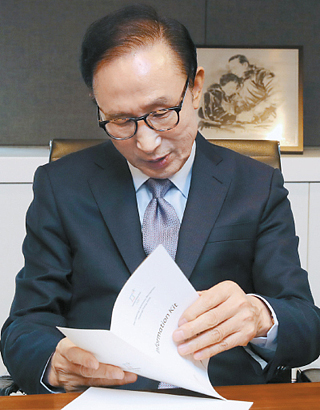 Former President Lee Myung-bak reads an invitation to the PyeongChang Winter Olympic Games in his office in Seoul on Wednesday. [YONHAP]

President Moon Jae-in invited former President Lee Myung-bak on Wednesday to attend the opening ceremony of next week’s PyeongChang Winter Olympic Games, despite their recent clash over the prosecution’s investigations into alleged corruption and abuse of power by Lee’s family and administration.

Moon’s senior secretary for political affairs, Han Byung-do, delivered the invitation in the afternoon. “I believe this Olympic Games must be held successfully,” Lee said. “Although there are various opinions, I will try to give a positive answer.”

According to a Blue House official, Moon stressed the need to invite Lee to the opening ceremony. “Lee had put enormous effort into hosting the Olympic Games,” Moon was quoted as saying by the source. “It is undesirable to stop him from attending the event for political reasons.”

The source said some Blue House aides advised Moon against inviting Lee because opposition parties may call it a “political show.” Moon, however, told the aides to hand-deliver the invitation and convey the offer with sincerity, the source said.

Han later said Lee confirmed he will attend during their private meeting. He said Moon’s request was delivered in a polite manner, as it was meaningful to have the presence of the former president, who managed to win the bid after Korea made two failed attempts.

Han made clear that no sensitive issues, including the ongoing prosecution’s probes, were discussed. “Lee said he wanted unity and reconciliation and hopes the best for the Moon administration,” Han said.

According to the Blue House, Lee is the only former president to receive an invitation. The widows of the late former leaders Kim Young-sam, Kim Dae-jung and Roh Moo-hyun will be invited.

Former Presidents Chun Doo Hwan and Roh Tae-woo lost their rights to attend, as well as all other former presidential privileges, after the Supreme Court convicted them of their roles in the Dec. 12, 1979, military coup and the Gwangju massacre in May 1980. Former President Park Geun-hye also lost her privileges since presidency ended with impeachment.

As Lee accepted the invitation, Moon and Lee will meet for the first time in more than two years during the opening ceremony, scheduled for Feb. 9. Their last meeting was during the funeral ceremony of former President Kim Young-sam on Nov. 26, 2015.

The meeting will also take place following a recent heated exchange between Moon and Lee.

Since last year, a series of probes are ongoing into Lee’s family and members of his administration on various charges. In a press conference on Jan. 17, Lee attacked Moon for using the prosecution to conduct a “political campaign to annihilate the conservatives” and exact “revenge for Roh’s death.”

Roh, Moon’s friend and political mentor, killed himself in 2009 during a probe over his family receiving bribes from a businessman. Allies of Roh have argued that Lee “politically murdered” his predecessor by humiliating Roh with corruption allegations involving his family.

Moon was furious over Lee’s accusation that he was pursuing a vendetta. Moon condemned Lee’s suggestion that the Blue House was manipulating the prosecution for political retaliation, warning Lee that he had crossed a political red line.

The prosecution is investigating a series of allegations involving Lee, who governed the country from 2008 to 2013. Multiple probes of his administration’s alleged interference in domestic politics and suspected corruption are simultaneously ongoing.

One of the latest investigations is on the allegation that the National Intelligence Service (NIS) ran secret domestic campaigns with money earmarked for North Korea operations to collect information about Lee’s liberal predecessors, Roh and Kim Dae-jung.

The Seoul Central District Prosecutors’ Office on Wednesday summoned Lee Hyun-dong, former commissioner of the National Tax Service, on charges of receiving money from the NIS in return for his cooperation in the clandestine operation to collect intelligence on the late Kim. Lee Hyun-dong headed the tax service from 2010 to 2013.

According to the prosecution, Lee Hyun-dong is suspected of receiving money in 2010 in return for his cooperation to go after Kim’s alleged slush funds in the United States. Kim, who governed the country from 1998 to 2003, died in 2009.

The prosecutors raided Lee’s home and office on Tuesday.