To sell merger, Ahn offers to step down

To sell merger, Ahn offers to step down 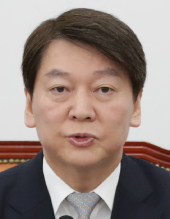 Chairman Ahn Cheol-soo of the People’s Party promised on Wednesday to step down from the top leadership post after the party completes a planned merger with the Bareun Party next month, a move designed to persuade lawmakers who may be lukewarm to his initiative.

“If you join my move, I will complete the merger on Feb. 13 and resign from the chairmanship,” Ahn said during the party’s Supreme Council meeting. “If my resignation will allow more people to join the merger, I am more than willing to make that choice.”

The People’s Party will hold a joint convention on Feb. 13 to finalize their merger with the Bareun Party, the fourth-largest party, with nine lawmakers, headed by Rep. Yoo Seong-min.

Ahn already announced in December his intention to step down after the merger. His promise on Wednesday reaffirmed this, specifying a date.

Ahn’s decision to resort to this method of persuasion likely stems from the fact that since he proposed the merger, his party has been split almost in half. On Sunday, 16 of its 39 lawmakers announced their decision to leave and create a new political party, the Democratic Peace Party. Ahn immediately suspended their party memberships.

Among these 39 lawmakers, 23 represent constituencies in Honam, the area comprising Gwangju and South and North Jeolla provinces. Among them, 14 have opposed the merger and joined the Democratic Peace Party. Only three Honam lawmakers so far support Ahn’s merger plan.

In addition to two proportional representatives, the new splinter party is made up of these 14 elected lawmakers, including Reps. Park Jie-won, Chung Dong-young and Chun Jung-bae, giving the new party a strong support base in Honam.

Rep. Cho Bae-sook was elected as the interim head of the new party.

As of now, about five lawmakers, who have come to be known as the “compromise faction,” agree with the idea of a merger but do not endorse Ahn’s approach. They have urged Ahn to accept their demands, which include his resignation, by the end of this week, while also making clear that they will not join the Democratic Peace Party.

Despite this, recruiting the “compromise faction” is crucial in order for the splinter party to meet the 20-lawmaker minimum needed to become a negotiation bloc in the National Assembly.

Winning the faction’s endorsement is also important for Ahn to justify the merger, as all five members of the group represent Honam districts. Ahn promoted the merger as a way to seek unity between the rival regions of Honam and Yeongnam. The Bareun Party largely represents Yeongnam, which comprises Daegu, Busan and North and South Gyeongsang regions.

Ahn has made concerted efforts to win the faction’s support. On Monday, he and Bareun Party Chairman Yoo met with them to win them over, but it remains to be seen whether they will join Ahn. They wanted him to step down by Sunday, but said his promise on Feb. 13 does not satisfy this demand. “Resigning after the Feb. 13 convention means nothing because the party will disappear anyway by then,” said Rep. Park Joo-sun, deputy speaker of the National Assembly and a member of the faction.

Now there is growing speculation that Ahn will run in the June local elections after giving up the chairmanship. “Ahn has not made a decision yet,” an Ahn aide said, “but he knows that he may have to run.”

Ahn’s promise also created a headache for Chairman Yoo of the Bareun Party, who has opposed his counterpart’s resignation. “I have always thought that Ahn and I must share responsibility for the success of the party to be created through our merger,” Yoo said. But Yoo may need to step down to create balance after the merger.