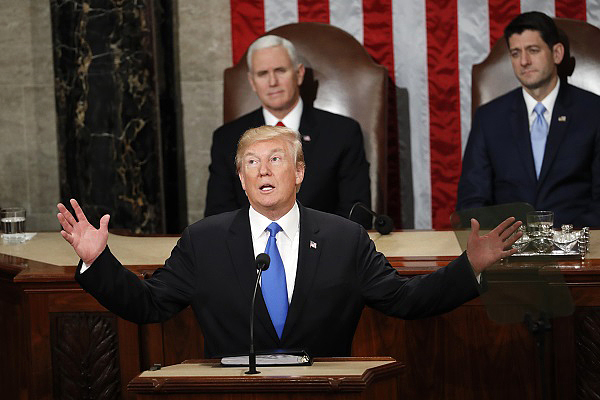 U.S. President Donald Trump delivers his State of the Union address to a joint session of Congress on Capitol Hill in Washington, Tuesday. [AP/YONHAP]

WASHINGTON - U.S. President Donald Trump said Tuesday that North Korea’s nuclear weapons could “very soon” threaten the American homeland but that his administration is working to stop that from happening.

Trump called out the North in his first State of the Union address before Congress as tensions have escalated over the regime’s development of nuclear-tipped missiles aimed at the United States.

“North Korea’s reckless pursuit of nuclear missiles could very soon threaten our homeland,” he said. “We are waging a campaign of maximum pressure to prevent that from happening.”

The Trump administration has led an international campaign to increase economic and diplomatic sanctions on Pyongyang with the goal of bringing it to negotiations on its denuclearization.

“Past experience has taught us that complacency and concessions only invite aggression and provocation,” Trump said. “I will not repeat the mistakes of past administrations that got us into this dangerous position.”

Earlier U.S. administrations made various agreements with the communist regime in a bid to denuclearize the country in exchange for economic and political aid. Critics say those efforts only helped North Korea buy time to advance its nuclear and ballistic missile programs.

But on Tuesday, he struck a softer tone and instead highlighted the human rights abuses of Kim’s regime.

“No regime has oppressed its own citizens more totally or brutally than the cruel dictatorship in North Korea,” he said. “We need only look at the depraved character of the North Korean regime to understand the nature of the nuclear threat it could pose to America and our allies.”

Trump cited the case of Otto Warmbier, a U.S. college student who died last year after being held in North Korea for more than a year. Warmbier’s family members were present in the chamber and stood up to applause from the attendees.

“You are powerful witnesses to a menace that threatens our world, and your strength inspires us all,” Trump said. “Tonight, we pledge to honor Otto’s memory with American resolve.”

Ji lost his limbs while trying to steal some coal to barter for food, Trump said, only to be tortured later by North Korean authorities who wanted to know if he had met any Christians during a visit to China.

“Today he lives in Seoul, where he rescues other defectors and broadcasts into North Korea what the regime fears the most - the truth,” the president said. “Today he has a new leg, but Seong-ho, I understand you still keep those crutches as a reminder of how far you have come. Your great sacrifice is an inspiration to us all.”

A visibly emotional Ji held up his crutches as the chamber gave him a round of applause.

The address came amid a rare opening for reconciliation between the two Koreas following Pyongyang’s agreement to participate in the PyeongChang Winter Olympics. Seoul hopes the momentum created by inter-Korean dialogue on the Olympics will lead to denuclearization negotiations between Washington and Pyongyang.