Murray proves up to challenge of unified team

Murray proves up to challenge of unified team

When the International Olympic Committee (IOC) decided to allow North and South Korea to form a unified women’s ice hockey team just a few weeks before the PyeongChang Olympics, it seemed like there was no chance the players would be able to come together as one team in time. 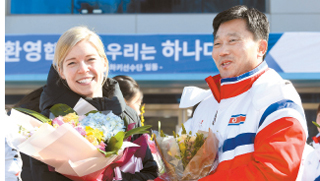 Despite the concern, Jim Paek, South Korea’s national hockey director, was confident leaving the team in the hands of head coach Sarah Murray. At a media day on Jan. 22 he explained, “She is a very strong woman who has a great hold on her team. We have conversation because she has her ideas and I have mine. But it’s her team at the end of the day. I think she has a great handle on the situation and on how she’s going to approach these things.”

As Paek predicted, Murray seems to have taken the last-minute change in her stride, with no significant issues arising in their training sessions. When the unified team was created, members of the Korea Ice Hockey Association (KIHA) voiced concerns that a young Canadian coach may not be might not be able to easily understand the concept of having a unified team created for political purposes.

Not only was the team created at the last minute, the decision by the IOC meant that Murray was forced to include at least three North Korean players in every game.

In September 2014, Murray was appointed as the head coach of the Korean women’s ice hockey team on Paek’s recommendation. At the time the Canadian coach was only 26 years old and the KIHA was concerned that Murray had almost no coaching experience.

“Murray’s father, Andy Murray, is a big name in ice hockey, being the former head coach of the Canadian men’s ice hockey team,” said Yang Seung-jun, executive director at KIHA. “Her brothers are former ice hockey players. Since she came from a hockey family, she was able to build her own philosophy.”

When Murray first joined the women’s team as head coach, Paek was still in charge as the ice hockey director. Paek used to watch the team’s training sessions from the stands and gave Murray coaching tips in the locker room while the players were taking a break. In addition to Paek’s advice, Murray also spent at least an hour every day talking to her father back in the United States, asking for advice.

Over three and a half years living in Korea coaching the young team, Murray and the squad matured together. Over the past two years, Paek has passed on the responsibility of the women’s ice hockey team to Murray and she had proven her ability as the head coach, winning the International Ice Hockey Federation (IIHF) World Championship Division II Group A.

“At first, it was a continuation of trials and errors since she didn’t have much experience coaching,” said Yang. “But recently, she’s shown confidence in managing the team.”

When she heard the news about the unified team, Murray was initially shocked. After getting over her surprise she resolved to come up with the best possible team at the Olympics.

“As far as I know, I have complete control and I am going to play the players I want,” Murray said at a press conference on Jan. 22.

Though Murray said having a unified team this late “isn’t fantastic,” she tried her best to bring the team together, focusing more on teamwork than teaching strategy.

First, Murray assigned the lockers for the players, mixing them together. Her positivity worked as planned, as it allowed the North and South Korean players to get along well within only three days of meeting at the Jincheon Training Center in North Chungcheong.

“Head coach Murray seems to have her own firm philosophy and belief,” said a KIHA associate. “Since the first day of the unified team call-up, she took the lead and has been leading the team as planned.”

Normally in ice hockey, with the exception of the goaltender, players are divided into four different lines with each line having five players. Teamwork among the players in the lines is the most important factor. Due to the lack of time, Murray first planned to add the North Korean players to the third line.

Once the two Koreas started training together on Sunday, Murray changed her mind and added one to two North Korean players to each line.

Despite expectations, Murray was impressed with the North Korean players, as they seem to have quickly grasped the team’s strategy.

“Murray is the head coach of the ice hockey team, not a politician,” said a source close to the ice hockey association. “She’ll try to make the best team. If she was affected by the political issue, she would’ve trained the North Korean players separately.”

Murray has been working well with her North Korean counterpart, Pak Chol-ho. Kim Do-yun, assistant coach, has been a big help as a translator for the two.

“Since Murray doesn’t have much experience as an instructor, she makes reasonable decisions rather than being authoritative,” said Oh Sol-gil, a former ice hockey player who is now a commentator for SBS Sports. “Rather than a charismatic head coach, female players tend to favor a detailed coach. I think the North Korean players sympathize with Murray’s detailed personality.”