Naturalized athletes give Korea a boost

Naturalized athletes give Korea a boost 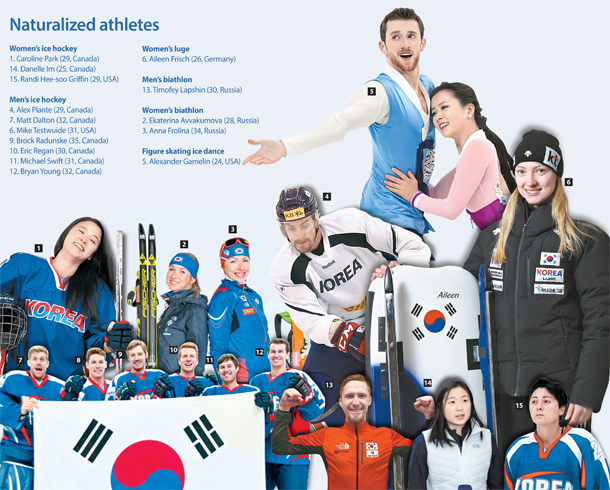 Korea will see an increase in naturalized athletes at the PyeongChang Winter Olympics, which means some athletes competing for Korea just might be mistaken for foreign players.

Out of the 144 players representing the host nation, over 10 percent are naturalized athletes. But it wasn’t always like this.

Korea only had one naturalized athlete for the 2014 Sochi Olympics, short-track speed skater Kong Sang-jeong from China, who won gold for the women’s 3,000 meter event.

Four years later, with over 2 million foreign residents, the host nation has seen a surge in its number of naturalized athletes. Of the 15 naturalized players, 10 are part of the ice hockey team, three will compete in biathlon and one each will be in figure skating and luge.

The Korean Sport and Olympic Committee explained that it actively recruited foreign players to increase Korea’s competitiveness because the country tends to fall behind other nations at the Games, apart from its performance in short- and long-track speed skating and skeleton.

Since 2010, Korea has introduced special naturalization for qualified athletes, which allows them to have dual citizenship.

On the men’s hockey team, seven of its 25 members are naturalized athletes from Canada - Matt Dalton, Alex Plante, Bryan Young, Brock Radunske and Eric Regan, as well as Mike Testwuide of the United States.

In Korea, they play on different teams of the Asia League Ice Hockey, but came together to lead Korea to fifth place at the 2017 International Ice Hockey Federation (IIHF) World Championship Division I A last April, allowing the nation to enter the 2018 IIHF World Championship. It is the first time Korea has earned a spot to play at the upcoming championship in May.

“It is an honor and I find it very special that the Korean Ice Hockey Association would consider asking me to play for the Korean national team,” Dalton, the goaltender, told the PyeongChang Organizing Committee for the 2018 Olympic and Paralympic Games in an interview. “I definitely don’t take it for granted and I plan to do the best I can for the Korea national ice hockey team.”

After graduating from Harvard, Griffin went on to pursue a joint masters and Ph.D. in biology at Duke University. She was born to a Korean mother and an American father in North Carolina, and has her Korean name, Hee-soo, which is also her mother’s name, on her uniform. As for her jersey number, she chose 37 in honor of her maternal grandmother, who was born in 1937.

Im, who was born to Korean parents in Toronto, received an email from the national team while she was studying at Wilfrid Laurier University in Ontario in 2012. Park, a Princeton graduate, was also contacted by the Korea Ice Hockey Association in 2013, when she was employed as a clinical research assistant at a hospital in New York City. While employed, Park continued playing hockey through a mixed hockey club and tried out for the Korean national team after the initial contact.

The most notable is Frolina, who placed fourth at the 2010 Vancouver Olympics, but stopped competing for Russia after giving birth in 2013. The biathlete won Korea’s first silver and bronze medals at the Biathlon World Championships last year, after naturalizing two years ago.

In luge, the 2012 International Luge Federation Junior World Champion Aileen Frisch from Germany will represent Korea, while the country will have Korean-American Min Yu-ra and Alexander Gamelin from the United States for figure skating ice dance. The pair will dance to the Korean folk song “Arirang.”

Cross-country skier Magnus Kim, who was born to a Korean mother and Norwegian father, and freestyle skier Lee Mee-hyun, who is a Korean adoptee to the United States, will also compete at the Olympics as naturalized athletes.

But while Korean naturalized athletes from other nations can increase Korea’s competitiveness in international sports events, some Koreans still feel uncomfortable with foreigners representing the country, given that Korea is a relatively homogenous nation.

“It is questionable whether Koreans will be able to feel a sense of kinship with athletes who naturalized in a hurry,” said Kim Yu-kyoum, professor of physical education at Seoul National University. “Even if they medal, will they help bring citizens together?”