TV actors bring talent to the stage: ‘The Mousetrap’ cast is enthusiastic about first theater project together

TV actors bring talent to the stage: ‘The Mousetrap’ cast is enthusiastic about first theater project together 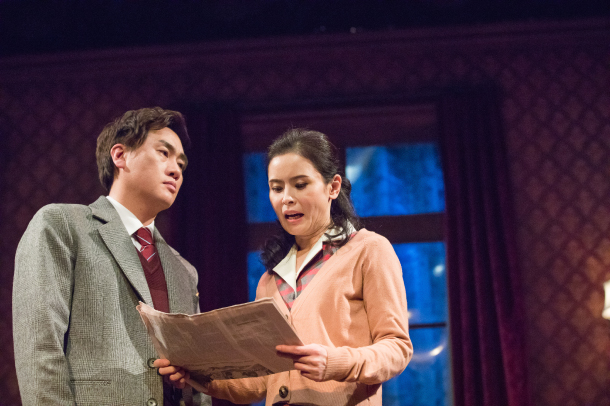 Actors Park Hyung-jun on the left and Lim Che-won on the right as Detective Sergeant Trotter and Mollie Ralston, looking at the newspaper. [NEWS1]

Famed mystery writer Agatha Christie’s original play “The Mousetrap” has been brought to life by a group of stage actors whose names and faces may seem very familiar.

This is because the actors starring in “The Mousetrap” are all entertainers who have starred in programs that have aired on television network MBC. The play is the first production of the newly founded MBC Talent Theater Company.

All the actors in the play have passed open auditions to become talent at the broadcast network, but due to the changes that have taken place in the entertainment industry, a majority of the network’s entertainment shows and drama series are cast through contracts with entertainment agencies instead of their own actors.

While the majority the actors entered into the world of television to pursue their dreams, some felt that they were growing apart from their jobs at the network. Seeing this phenomenon, the president of the MBC talent group, Yoon Chul-hyung, gathered a group of actors to establish the first theater company made up of talent from MBC last October to encourage the actors and help revive local theaters.

With the support of successful television producer Choung Sei-ho and screenwriter Choi Wan-gyu, the group of actors embarked on a journey brimming with excitement for doing the job they love.

After the show’s premiere, actors Lim Che-won, Jung Ye-hun, Yang Hee-kyung, Park Hyung-jun, Lee Ho-joon, Jang Bo-gyu, Lee Jung-hwa, Yoon Soon-hong and the director Yoon Chul-hyung met with the press to share their thoughts after their first performance and discuss their plans for the future of the theater company. The following are edited excerpts from the interview. 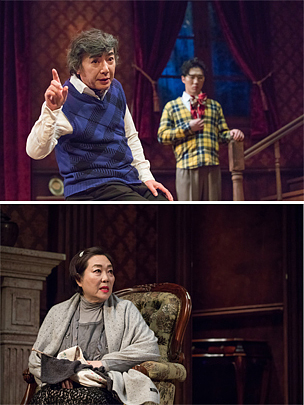 Actor Yoon Soon-hong, top, as Mr. Paravicini and actor Yang Hee-kyung, above, as Mrs. Boyle in “The Mousetrap.” [NEWS1]

Q. How do you feel after your first performance?

A. Lim: It has been a long time since I stood on stage in front of people. I haven’t done it since I was in my twenties. For me, I was actually more attracted to stage acting instead of acting on screen, but I never got the chance to do so. Also, although I felt there was certainly room for improvement in my acting, there weren’t many opportunities for me to really go over my limits. But through this play, I received so much guidance and advice from my seniors, and have had the most memorable and precious time. I am so glad that we are all from MBC, and [being in the play] felt like home to me.

Yang: I’ve always been active as a stage actor and had many performances over the course of my life, so I was a little worried about working with younger actors who have either rarely or never been in a play before. We gathered in October and from the first script reading, we practiced hard so that the flow of the play and chemistry would be right. The natural flow and chemistry is the most essential part of a play. And as an actor, I think acting for television, stage, and movies are all distinct in their own ways, and I wasn’t sure how to pass on those skills on to the younger actors. Some of the actors have just learned how to act on stage.

When you’re in a play, the acting is not just about you. It requires a team effort, and it’s partly a creative process of building the story together. After you’re through, your acting, or your philosophy about acting gradually change, and that’s how you grow. And when I witnessed how the other actors developed through this play, I was proud, and thought to myself, that I’ve made a good choice to be part of this play. It’s hard, but everything is worth it.

Lee: Although I am the youngest member of the production, I have gained so much through this play and felt so comfortable here... It is a blessing to be part of a production that I love so much, to play a character in a piece that I like, and just to act with the older actors that I have always respected and admired. I think that this is just a beginning of something wonderful, and I hope that I can continue be part of it.

Park: I have been a television actor for over 20 years, and while what the people want seems to shift over time, my acting has stayed the same. So, one of the reasons we established this theater company is because we all wanted to change. Although we started from nothing, all of us - the staff members, actors, and supporters - pitched in to make this happen, and we’re just thankful that we could finally put on the show. Although we may have not shown you our best yet, we stand here today because we want to change, and we will keep on trying, to fit to the needs of the people.

Why did you decide to establish this company?

Yoon: Last August, I was voted the 24th president of the MBC talent group. Our numbers total an estimated 450 people from the 1st year to the 31st, but I was saddened to see that most of the actors were doing something else to make ends meet. They are all talented actors who passed highly competitive auditions to be part of this group. So I thought to myself, “What would be the thing that only the talent from MBC can do?” I decided that we should act on stage again, and formed the MBC Talent Theater Company. We started at the end of October, and I asked Chung who once worked for MBC to direct the play. He was as enthusiastic about this as me and we have worked together ever since.

We decided that our first play should be a classic, and Chung suggested that we should do an Agatha Christie piece. We asked Choi to adapt the story to our needs, and the scripts have been changed multiple times since it was first written. The actors have had to memorize them over and over again.

Before we premiered today, we were practicing the scenes for the last time, and while I was taking photos, I suddenly felt tears well up as [I realized that we had achieved our goal.] A sense of triumph also came over me. I am sure that this theater company will never disappear. It is the first theater company to be found by group of active actors and one of the bravest attempts too. I believe it will continue to run as passionately as it started, from a group of zealous people who loved doing what they do, and were not afraid to start something new.

Yoon: We just took our first step today. The play will be on stage until March 25 and then we will rest for a while. I’m not sure if we will stage an encore performance or go with another play after that. We are thinking of various ways, but I think we will continue to go with classics. For instance, we are thinking of “And Then There Were None,” another Agatha Christie’s masterpiece, or even a musical. But what is important now is to focus on “The Mousetrap” and slowly consider our options for the next piece.

Do you have any plans to recruit other stage actors who are currently active in Daehangno (central Seoul’s theater district)?

Yang: We joke about this every now and then. I mean, our youngest member of the group is in their mid-forties. We must be the oldest people to establish a theater company. So, of course we will need reinforcements, and we will bring those who are acting in television series and those who have experience on stage here as well. It’s healthy for both sides because the stage actors who have been on stages for many years can also show off their talents in broadcast, and the drama actors who have been so busy with their series can come here to realign their acting skills.

In this sense I think all of us here grabbed that opportunity and we hope that the company can continue to provide these kinds of chances to others as well. Through this company, I hope that it can circulate interaction between TV drama series and stage, working to meet the expectations of the viewers and the audience, and also to stimulate the actors to continue to pursue their careers with joy.