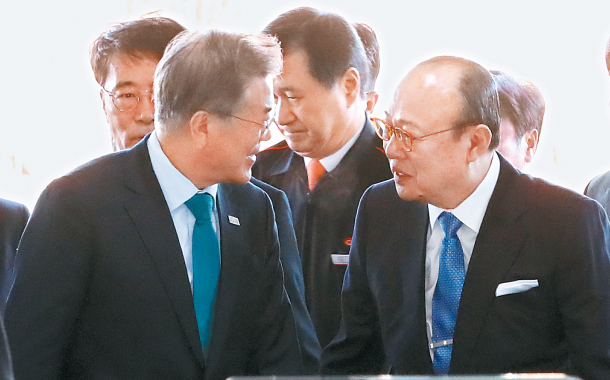 President Moon Jae-in, left, exchanges pleasantries with Kim Seung-youn, chairman of Hanwha Group on Thursday at a solar cell factory of Hanwha Q CELLS in Jincheon, North Chungcheong. Moon visited the factory in an effort to impress the young by promoting his job policy. [YONHAP]

According to a Realmeter survey announced on Thursday, Moon’s approval rating for the fifth week of January was 62.6 percent, up 1.8 percentage points from the previous week. Respondents in their 20s, 30s and 40s all showed support higher than 70 percent, leading the rebound.

Last week, Moon’s approval rating fell 6.2 percentage points from the week before to reach 59.8 percent, the lowest since he took office in May 2017.

He was hurt by his campaign to engage with North Korea over the PyeongChang Winter Olympic Games and his government’s flip-flops on cryptocurrency regulation.

“It appeared that the rapid withdrawal of support over the past two to three weeks is calming down,” Realmeter said.

Moon responded to criticism of his support of a joint women’s ice hockey team for the Olympics between the two Koreas at a workshop with ministers and vice ministers on Tuesday.

“I thought it was a good plan to improve inter-Korean relations and to promote peace, but I failed to take into account the athletes’ positions,” Moon said. “We must not ignore the minority and put efforts into persuading them in advance.”

During the workshop, the first such event in his administration, Moon also told ministers and vice ministers to pay special attention to public responses to controversial policies, such as regulation of cryptocurrencies and a government plan to discontinue English classes in all kindergartens and day care centers.

He has also tried to impress the young by prompting his job policy. On Thursday, Moon visited a solar cell factory of Hanwha Q CELLS in Jincheon, North Chungcheong.

One of the key programs promoted by Moon is reducing work hours to create more job opportunities. A senior Blue House official said Hanwha Q CELLS was visited by Moon because it is following that policy.

Since opening in 2016, the factory hired 1,500 new employees. Starting April 1, the company will reduce employees’ working hours. The company will hire 500 more people as a result.

It was the first time Moon visited a factory of a top-10 Korean company since he took office. Until now, he visited small companies, start-ups and micro business owners.