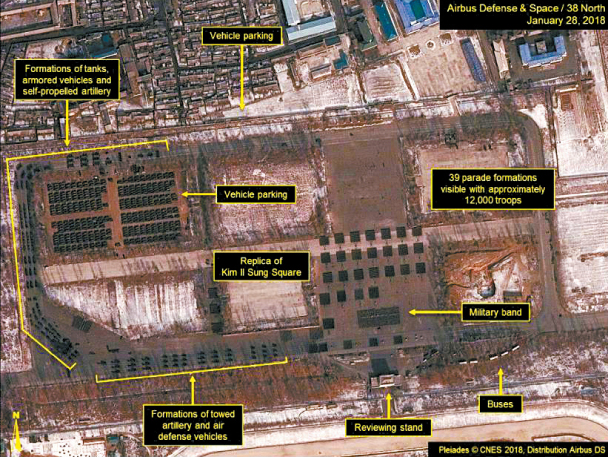 One of several satellite images released by 38 North shows increased numbers of North Korean personnel and vehicles practicing in formation on the outskirts of Pyongyang last Sunday for a military parade expected to be held next Thursday to mark the 70th army founding day. [YONHAP]

Satellite images of North Korea’s preparations for a military parade were released Wednesday by 38 North, a website that specializes in North Korea analysis, showing at least 12,000 troops and 110 artillery pieces, tanks and other armored vehicles practicing on training grounds on the outskirts of Pyongyang.

For weeks, South Korean authorities have suspected that the North was preparing to hold a “massive” and “threatening” military parade next Thursday, on the eve of the PyeongChang Winter Olympic Games, to celebrate the 70th anniversary of the founding of the Korean People’s Army.

But satellite images were never shown to local media, and Pyongyang has never officially acknowledged that a parade was forthcoming.

According to 38 North, a website run by the U.S.-Korea Institute at Johns Hopkins University’s School of Advanced International Studies, satellite images taken last Sunday show preparations for a military parade at the Mirim Parade Training Facility with a “noticeable increase” in the number of personnel and vehicles present.

There were no signs of ballistic missiles or unmanned aerial vehicle launchers on the parade grounds or at the heavy vehicle storage area, wrote the website, but given previous practices, those vehicles were usually the last to arrive, a week or so before the parade.

The military parade next Thursday will likely be “relatively smaller in scale” compared to previous parades because there were no signs that the North erected additional housing for its vehicles and equipment.

“Even with the large number of vehicles and heavy equipment present, it is unlikely they will all be used in the formal proceedings, as it is customary to have some on hand in case of mechanical failures during the proceedings,” according to 38 North.

A South Korean government official who spoke on the condition of anonymity said last Monday that the number of people practicing on the training grounds had swollen from 13,000 to 50,000 recently, adding that the figures were growing ever day.

That includes civilians, who use large colored placards to spell out propaganda slogans and cheer on goose-stepping soldiers marching by. The largest military parade North Korea has ever held was on Oct. 10, 2015, when the country celebrated the 70th anniversary of the founding of the ruling Workers’ Party, which saw some 20,000 troops and 100,000 civilians in attendance in Kim Il Sung Square in Pyongyang.

Aside from the parade, local government officials are wary that Kim Jong-un might be up to something more provocative, given that his public outings were featured in North Korean media only three times last month, the lowest number since he rose to power in December 2011.

January 2013 was the only year in which he was reported to have given three public inspections - and a month later, the North carried out its third nuclear test. Kim has a history of going low-key before making a big move, like when he ordered the assassination of his own uncle Jang Song-thaek in December that year for “attempting to overthrow” the government.