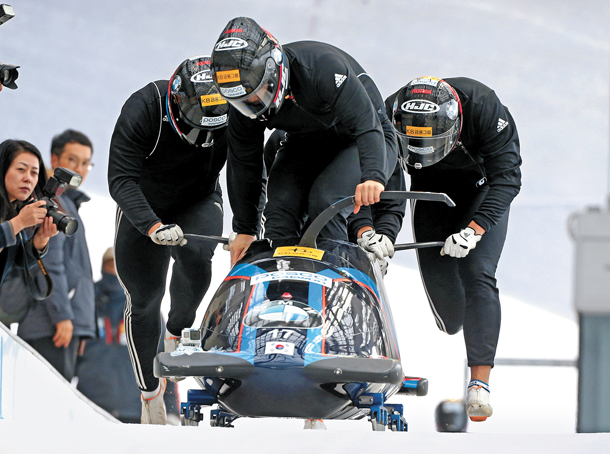 Bobsled has never been considered Korea’s strong suit. Until last year, the country didn’t even have a proper sliding track. 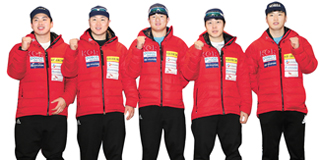 Nonetheless, the two-man team of Won Yun-jong and Seo Young-woo has consistently surprised the world. In the 2015-16 season, they topped the world ranking, an impressive feat for a pair that has had to rely on practice tracks at international events.

Now, there’s talk of Won and Seo winning gold at the PyeongChang Winter Olympics, which would be a first for Korea. Not only that, their coach, Lee Yong, has set a goal of winning a medal in four-man bobsled, with the duo of Jun Jung-lin and Kim Dong-hyun joining Won and Seo.

Since December, the bobsled team has been training at the Olympic Sliding Centre in Pyeongchang County, Gangwon, rather than competing in International Bobsleigh and Skeleton Federation (IBSF) World Cup events, which is how most countries have been preparing for the Olympics. The Korean team wants to make the most of its home advantage and has been racing down the track six to eight times a day.

While the medal odds are good for Won and Seo, the four-man team has a longer way to go. Aside from a fifth-place finish at a World Cup race in December 2016, they have never finished inside the top nine. This season, they finished 11th and 10th in the first two IBSF events.

Since the team was doing so poorly, Kim and Jun decided to drop out of the two-man event and focus on working with Won and Seo to develop the four-man team. Won and Seo will still represent Korea in two-man.

“Personal greed wasn’t important,” Kim said at a news conference in Pyeongchang on Wednesday. “I made the decision because I was certain that we could have a better result in four-man than two-man.”

It’s not going to be easy. Four-man bobsled requires even greater teamwork than racing as a duo.

“Since we didn’t compete in all the World Cup races, I feel greater responsibility,” Seo said at the conference.

The team has gone through a lot of training sessions and slowly seen improvements. One of their first moves was completely changing everyone’s positions.

“Since Seo Young-woo has both power and speed, I assigned him to be a push man with Jun Jung-lin,” Coach Lee said.

Kim changed his position from pilot to brakeman, a position he held at the 2010 Olympics.

“In the past two weeks, our starts have gotten better and we’ve reduced our time,” Lee said. “Now, I have certainty that we may have a chance if we compete against the fastest countries like Germany and Canada.”

However, the second- and third-ranked teams have changed with every race. Since the rankings have fluctuated throughout the season, the Korean team expects to surprise the world again, this time in four-man bobsled.

The key will be maintaining stamina while minimizing mistakes. Unlike World Cup races, where rankings are determined from the combined time of two runs, the final rankings at the Olympics are tallied after four runs.

“Unlike other tracks, the PyeongChang track is shorter in between sections,” Lee said. “Teams who are not used to this will make mistakes at the Olympics. Having home advantage is our biggest asset.”

In daily training, the team has focused on racing down the track without making a single mistake.

“We’ve completed our drive training well,” Won said. “I’m confident that we won’t fall behind even if we race against the world’s best driver.”

In total, the team has gone down the track more than 400 times, according to the coach. With enough sliding experience, the crew will wrap up their training at the Jincheon National Training Center in North Chungcheong.

“We are athletes,” Kim said. “Rather than speaking our determination, we’ll show it on the track.”