We are all Olympic hopefuls

We are all Olympic hopefuls 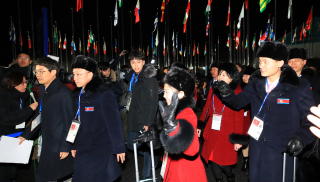 The last time the Olympic flame was lit in South Korea was 30 years ago. The PyeongChang Winter Olympics, the first international multi-sport event to come to Korea after the 1988 Summer Olympics, kicks off on Feb. 9.

That summer of 1988, I was training for my military service. I still remember the tune of the song I often heard during break time. It was Cho Yong-pil’s “Seoul, Seoul, Seoul.”

We eased our disappointment of missing the first Olympics in our country by singing a song about the beauty of our capital.

On Sept. 17, I was able to see a 7-year-old school boy in a baseball cap and a white T-shirt dazzle the crowd and the global TV audience by jogging across the green field while rolling a metal hoop with a stick during the opening ceremony at the Olympic stadium.

I also learned that this image became the symbol of the Seoul Olympics, representing a budding Korea on the international stage in its new wealth after combating postwar poverty and the challenges of industrialization.

That schoolboy, who was born on the historic day Seoul was named the host city for the Summer Games, would soon be middle-aged.

The cute, healthy boy resembled Korea in the 1980s. The world knew little of our small country except that it was poor and had suffered a war, but now it saw Korea in an entirely new light.

After two crippled Olympics, one in Moscow in 1980 and one in Los Angeles in 1984, the Seoul Olympics was a watershed in many ways. It brought together every member of the eastern and western hemispheres that were divided by the Cold War.

It was not coincidental that the Berlin Wall came down the following year. Cho’s song was like a prologue to an epic finish of a chapter about ideological polarization.

That young boy was taught how to hoop roll by literary critic Lee O-young, who later became the first culture minister. The director of the opening and closing ceremonies then pushed ahead with the idea despite objections about having a single child on the immense field while the whole world watched.

But he wanted to show to the world a new and dynamic Korea that had washed away its old image as a poor, war-divided and orphan-exporting country.

He later shared an interesting story about the boy. The boy was left-handed, but he unknowingly trained the boy to roll the hoop with his right hand for a month.

He later regretted his narrow-mindedness.

At the PyeongChang Olympics, kids will once again be featured in the opening ceremony.

As part of their performance, when the ring tolls to invite the global community, five children living in the snowy village of Gangwon will set out on a trip in search of peace.

The use of children have become a regular feature of Olympics ceremonies as they personify the host country and city. A small girl received the spotlight during the Sydney Olympics in 2000 and also at the Beijing Olympics in 2008, as well as a small boy in Vancouver in 2010.

Dimitris Papaioannou, the artistic director of the opening and closing ceremonies of the Athens 2004 Olympics, put a child in a paper boat and sent the child across the lake for the night ceremony.

This created one of the most enduring images of the event. Papaioannou said he got the idea from the hoop-rolling boy at the Seoul Olympics.

The opening ceremonies of modern Olympics have become more and more spectacular. They epitomize the host country’s historic, economic and cultural capabilities and imagination.

These extravagant displays started with the Berlin Olympics in 1936, which served as Nazi propaganda. The Olympics have since come under fire for nationalist and commercial excesses, but no one doubts the peaceful spirit of the Games.

The conditions on the Korean Peninsula and around the world have not entirely improved over the past 30 years.

Ideological barriers have come down, but new walls are being erected at the frontiers of nationalist interests.

Pyongyang still poses a menacing threat, and many worry about post-PyeongChang Korea. Will the Games burn away these uncertainties?

As it was three decades ago, we still hope to move beyond present obstacles and reach for the future.

*The author is a culture and sports news editor of the JoongAng Ilbo.