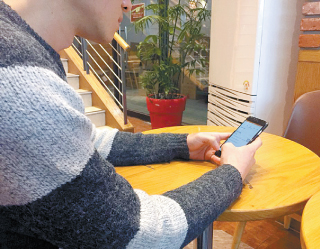 Choi Young-jin,a 29-year-old bitcoin investor, looks at a cryptocurrency exchange app on his smartphone at a cafe in Ilsan, Gyeonggi. [PARK CHAN-HO]

Kim Han-sol, a 25-year-old university student, couldn’t face checking on the value of his cryptocurrency investments after prices plunged at the start of this year. Kim’s uncertainty only deepened as the government flip-flopped on cryptocurrency regulations and even considered banning all exchanges.

Kim is part of a large group of young people that have invested in cryptocurrency as Korea’s job market remains sluggish and prices continue to climb.

Park Jae-min, a student at the Catholic University of Korea, said that he decided to jump into cryptocurrency after a friend earned a lot investing in the new market. He initially invested for fun without committing a huge amount of capital. He even earned 30 percent profit on his primary investment. The low interest of periodical and fixed deposits made cryptocurrencies such as Bitcoin a more attractive form of investment.

Due to the potential to rake in huge profits within a relatively short period of time, people feel more attracted to gambling on cryptocurrency than investing with traditional banks. According to reports from the Korea Federation of Banks, the average interest on fixed and periodical deposits is approximately 2 percent. On the other hand, the price of cryptocurrency has huge volatility, which means that people are able to earn more compared to savings or other financial products. Choi Young-jin, a 29-year-old investor, was aware of the interest at commercial banks; but the main reason he decided to invest in cryptocurrencies was because of the high-risk-high return appeal. 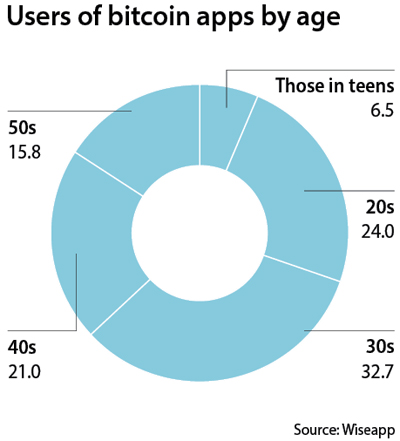 Hong Choon-wook, an analyst at Kiwoom Securities cautioned that, “Retail investors with limited money are more likely to have less information.” The stock market is structured in such a way that it favors institutional and foreign investors, who likely have more access to information, over personal investors.

Data from the Korea Statistical Information Service shows that as a general rule the younger someone is the lower their income is. As a result, cryptocurrencies are increasingly seen as one of the only investment options with a level playing field in terms of the potential for high returns.

Recently the government announced that it is going to control the cryptocurrency market by introducing a real-name financial transaction system. Investors will need to visit a bank and create an account with their real-name bank accounts. The policy will go into effect on Jan. 30.

After the new regulations were announced the price of cryptocurrency plummeted. The uncertainty in the market has shaken public support in the Moon Jae-in administration. Investors like Kim feel like the government has let them down by creating uncertainty that impacted the value of their investments.

Not all investors are upset. Choi, the 29-year-old investor, thinks that the government was right to attempt to regulate the market. He admitted, “Cryptocurrency is one of the most controversial issues these days. The regulation of the market is not just about me and the flow of capital should not get into the market like this.”