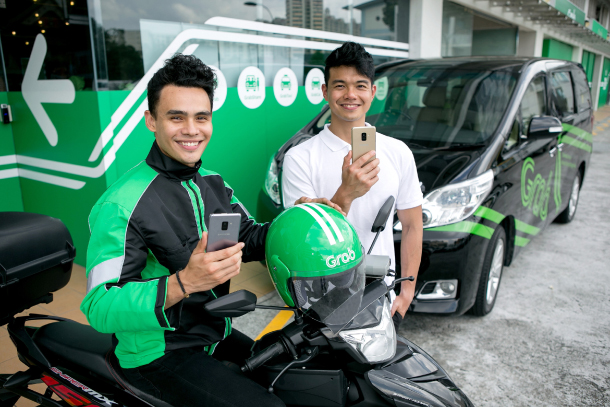 Employees of the ride-sharing company Grab pose with the company’s app on their smartphones. [SAMSUNG ELECTRONICS]

The ride-sharing industry is a new battlefield for major conglomerates in search of new areas of growth.

It was Samsung’s first foray into the field.

The tie-up is expected to allow Grab to improve its customers’ rides with technology and devices supported by Samsung. The Korean tech giant gets a wider user base for its devices and car infotainment system.

Grab, Uber’s rival in Southeast Asia, is in over 168 cities in eight countries including Singapore, Indonesia, the Philippines, Malaysia and Myanmar. It offers ride-hailing services from cars, motorbikes and taxis, as well as carpooling services. Grab’s app has been downloaded onto 77 million mobile devices and provides over 3.5 million rides daily.

In the first phase of the partnership, Samsung Electronics will offer its Knox mobile security technology to Grab. The Knox software is designed to keep data on mobile phones safe from malicious software and viruses and it should be useful for Grab’s mobile payment service.

The partnership also allows 2.3 million Grab drivers across Southeast Asia to buy Samsung’s mobile devices - customized for Grab drivers - through financing programs. According to Grab, a pilot program in Myanmar was run in the last quarter of 2017 and more than 1,400 drivers bought Samsung devices using microloans from one of Myanmar’s largest banks. Similar forms of financing will be offered throughout Southeast Asia this year.

Samsung will install tablet computers in Grab’s taxis in Singapore. The tablets, equipped with Knox, will offer content such as customized advertisements, videos and information on restaurants and will be used by passengers as an in-car multimedia service. The tablets will be adopted by Grab-operated cars throughout Southeast Asia later this year in a pilot project.

As the traditional auto business shows signs of slowing down, the automaker has been looking for new opportunities in the ride-sharing industry. Korea’s largest automaker signed a partnership with Grab last month to provide its Ioniq Electric cars for Grab’s ride-hailing service in certain countries including Singapore.

Hyundai thinks the partnership could improve its reputation in Southeast Asia once its cars are widely used by Grab drivers. The automaker hopes to collect data on vehicles, users and journeys made through Grab for future service upgrades as well.

After making its first investment in SoCar in 2015, SK has expanded investments in car businesses of the future. Last May, SK Holdings invested in local carpool company Poolus and acquired 19.99 percent of the start-up. Last September, it took part in equity investment in U.S. car-sharing company Turo together with German carmaker Daimler AG. It dropped a used-car business in November to narrow its focus on new areas with potential for growth.

“The ride- and car-sharing businesses are the kind of ‘good’ investments companies can make as they help solve many social problems like pollution and heavy traffic,” a spokesperson from SK Holdings said.

“The sharing economy is a global trend with large investment potential. We hope to build up fresh models of global cooperation in the sharing market.”

While ride-hailing services like Uber are not allowed in the country due to opposition from taxi operators, the car-sharing business in the form of short-term car rentals or carpooling continues to expand.