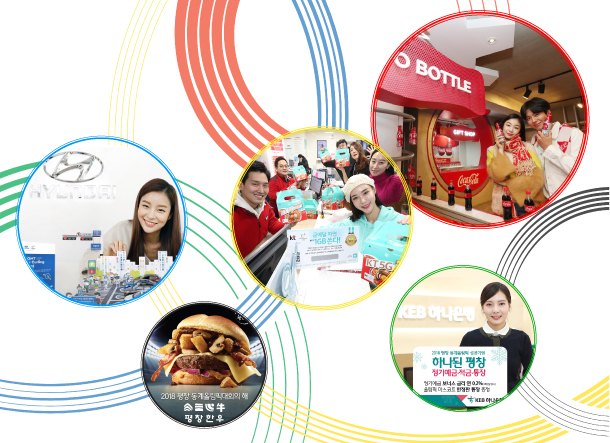 The Olympic Games are considered one of the most effective and coveted international marketing platforms, which means major corporate players are vying to land sponsorship deals or exclusive marketing rights.

With the PyeongChang Winter Olympics less than a week away, official sponsors are eager to associate sporting events with their products and services while fending off non-official sponsors’ attempts to ride the wave of Olympic fervor.

To the uninitiated, corporate sponsors may appear to all have the same level of access and privileges, but there is a strict hierarchy dividing sponsors based on their donations.

At the top of the pyramid are members of the International Olympic Committee’s Worldwide Olympic Partners, also known as TOP (The Olympic Partners) sponsors. This time around, 13 multinational companies, including Samsung, Coca-Cola, Visa and Panasonic, are TOP sponsors. Most have maintained this status for years. But for China’s internet giant Alibaba, PyeongChang is the debut stage.

Beneath TOP sponsors are sponsors whose Olympic-related marketing is restricted to Korea. These include McDonald’s, KT, Hyundai Motor and Korean Air.

As the only domestic worldwide partner, Samsung Electronics will supply a range of tech products from tablets, laptops and PCs to smartphones, TVs and Gear VR. Olympic athletes are entitled to receive Samsung’s free, special edition of the Galaxy Note, featuring the iconic Olympic rings on the back of each one.

KT, the country’s leading telecommunications company, pulled out all the stops to link itself with the Games, as the company was selected to provide the 5G network service at PyeongChang stadiums and residences.

The carrier will give out free mobile data coupons for anyone visiting KT stores during the Games, along with a package of limited-edition ramen titled “5G Ramyeon,” in collaboration with the food company Ottogi.

It also set up exhibition halls to allow visitors to experience winter sports through augmented and virtual reality technology at both Gangneung in Gangwon and at the office headquarters in Gwanghwamun, central Seoul.

“We’ve taken different marketing approaches to link our services with the PyeongChang Olympics,” said a KT spokesperson, “ranging from the launch of a venue map app and exhibition halls to promotions for visitors. We hope to gain access to potential clients while showing our advanced 5G technology.”

Others are more oriented towards carrying out campaigns featuring their own themes.

Hyundai Motor launched a campaign called “Light Up Car Curling” to promote safe driving, which allows people to play a video game on YouTube by marking which car they think will win a race, using a format taken from curling.

SK Innovation, an energy affiliate of SK, will deliver financial support to athletes, deciding the amount depending on the number of views videos receive after being uploaded to YouTube, Facebook and its official blog.

Some sponsors opt to release special products connected with the event.

Official sponsor KEB Hana Bank launched an installment savings product that will offer extra interest benefits when the Korean national team ranks fourth or above. Subscribers will get an extra 0.2 percent interest on top of a base rate of 2 percent.

McDonald’s released a new hamburger made of hanwoo (Korean beef) in Gangneung. The company said that it sold 10,000 PyeongChang Hanwoo Signature burgers this week.

Omega, a luxury watchmaker, is the official timekeeper of the Games and has produced a PyeongChang 2018 watch collection.

As one of the oldest TOP sponsors, Coca-Cola opened a giant booth in the shape of a vending machine near Hongik University in western Seoul. “This is a five-story booth,” said a public relations official from Coca-Cola Korea.

“In the basement floor, people can see different Olympic-themed cans,” the official added. “The first floor is a photo zone where LED displays make you think you’re in snowy Pyeongchang, while the other floors let visitors experience actual winter games on mini ice rinks.”

The rare opportunity to reach such a global crowd has also triggered so-called “ambush marketing’’ by non-affiliated sponsors. KT, for instance, filed a complaint against SK Telecom after SK Telecom aired a commercial featuring Kim Yuna on the ice rink. The Korean Intellectual Property Office ordered SK Telecom to drop the advertisement.

The Industrial Bank of Korea was also asked to change the name of one of its products as KEB Hana Bank has exclusive rights to use Olympic-related words in promoting their services and products.