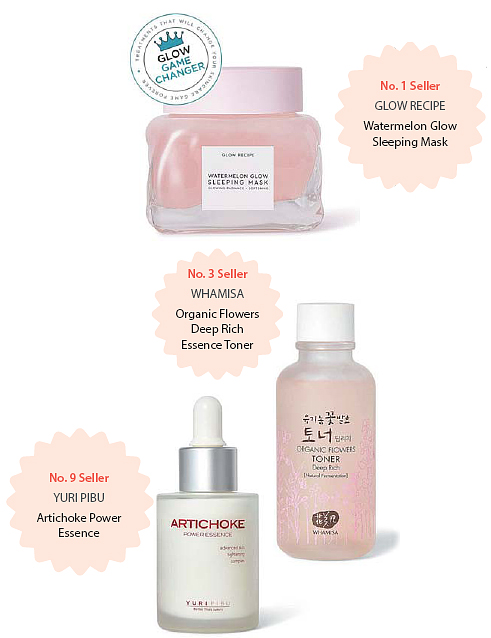 It is no longer strange to see Western people using Korean skin care products. In fact, according to Global Trade Atlas, Korea had the fifth-highest exports of makeup and cosmetic products to the U.S. last year, contributing to the 38.39 percent on-year increase in Korea’s experts to the U.S.

Glow Recipe, which has seen triple-digit growth every year, is unfamiliar to many Koreans, but their products have been sold at Sephora stores in the U.S., sometimes even selling out.

American Ali Ashby said, “I saw Glow Recipe’s Watermelon Glow Sleeping Mask in Sephora’s new product section, and just after reading a little bit about it, I thought it would be fun to try it out. But when I decided to purchase it, it was out of stock.”

According to Glow Recipe co-founders Christine Chang and Sarah Lee, Americans tend to be attracted to products that offer a fun experience.

“We saw the influence of K-beauty and created a new word called Skintertainment [skin and entertainment], and started a new movement that says skin care can be fun and exciting,” said Chang. “U.S. brands have recently started to bring out a variety of textures, including gel creams and watery toners, as a result of Korea influences.”

“When it comes to skin care, Americans prefer a product that gives a clean, mild cosmetic feel to consumers rather than a product containing artificial preservatives, hues, fragrances and alcohol,” she added.

“Americans prefer affordable, easy-to-use cosmetics,” said Chang. “They prefer multi-function products that can be used as a single skin care product. On the contrary, Koreans tend to think that spending time and money on skin care is valuable, so they prefer a stepwise skin care method.”

Prof. Kim continued, “So now the goal is to reach the top three, and if only a few obstacles are removed, it can be achieved.” Meanwhile, Sarah Lee, one of the co-founders of Glow Recipe, is sure that Korea will soon be number one.