Justice Ministry probes its own assaults

Justice Ministry probes its own assaults 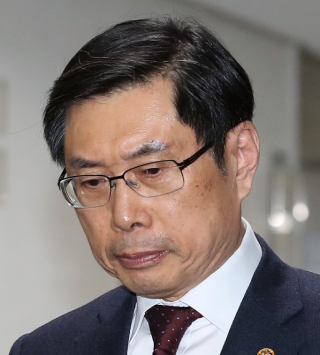 The Ministry of Justice formed a committee to investigate sexual harassment in its ranks and named Kwon In-suk, a feminist scholar, to chair it.

Kwon was the first woman to bring charges of sexual assault against the government after being assaulted by a policeman in 1986.

Justice Minister Park Sang-ki announced a campaign to investigate and prevent sex crimes within the ministry at a press conference Friday afternoon. This followed a prosecutor’s recent claim that she was groped by a senior colleague eight years ago.

According to Park, the committee will investigate all alleged sex crimes within the ministry and institutions under its supervision such as correctional facilities and immigration offices. The prosecution has created its own task force to investigate sex crimes by its members following the prosecutor’s revelation.

On Monday, Seo Ji-hyeon appeared on JTBC Newsroom and said Ahn Tae-geun, then-director general for policy planning at the Ministry of Justice, sexually molested her at the funeral of a mutual colleague’s father on Oct. 30, 2010. Seo claimed her career suffered after she complained internally. Following the interview, the Supreme Public Prosecutors’ Office launched Wednesday a special team to look into Seo’s claims and other cases of sexual crimes within the prosecution.

“I am extremely remorseful for the pain Seo suffered,” Minister Park said during a press conference on Friday. “We must not allow Seo to be criticized, attacked or disparaged.”

Park also apologized for his own failure to act on Seo’s case. “The people probably think the measures taken by the ministry since it became aware of Seo’s case were entirely insufficient,” Park said. “I am also very sorry about the controversy surrounding the error about email exchanges [between me and Seo].”

The ministry insisted that Seo didn’t ask for an internal investigation, but suddenly changed its position on Thursday, admitting that Park was informed last year about Seo’s case and ordered officials to find out what happened. “Up until early morning [on Thursday], Park could not remember Seo’s request, but discovered in the afternoon that he had exchanged emails with her,” a Justice Ministry official said.

“I will fully support the committee’s activities and accept its recommendations to prevent any recurrence of an internal sex crime in the future,” Park said Friday.

Kwon, who will head the committee investigating sex crimes within the ministry and institutions under its supervision, is the president of the Korean Women’s Development Institute.

While working as a labor and woman’s rights activist in 1986, Kwon was sexually abused by a police officer at the Bucheon Police Station while being questioned about her involvement in violent demonstrations. She filed sexual assault charges against the government, triggering a rally to protest the authoritarian regime’s abuses.

She later studied feminism at Clark University in the United States and worked as a rights activist in Korea.