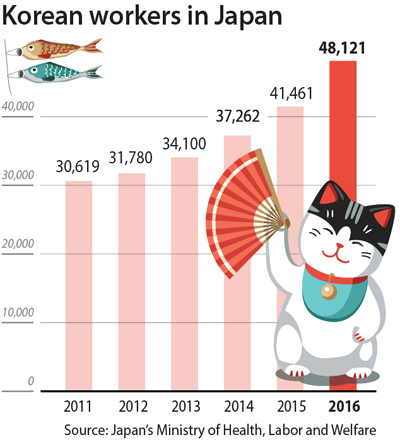 A 30-year-old surnamed Bae moved to Osaka, Japan, in February 2013 after hearing rumors it was easier to get employed than in Korea. But just a year later, he returned. He’s now working at a Korean company, and never wants to go back to Japan.

The Korean government has been supportive of the migration. The Korea Trade-Investment Promotion Agency (Kotra) hosts a project named K-MOVE, a mentoring program that provides job-seekers with useful tips. Kotra and the Korea International Trade Association (Kita) hold job fairs in Korea and Japan to connect Korean job seekers with Japanese employers and vice versa.

Kim Ji-yoon, 24, who graduated from Seoul National University with a bachelor’s degree in Korean language and literature, was hired by a Japanese retail company, which she said had “nothing” to do with her major.

Her fondness toward Japan dates back to March 2013, when she started a part-time job there as a transfer student. She first worked at a ramen restaurant for a year, then was employed at a pub for another year. What impressed her the most throughout the experience, she said, was Japanese decorum.

“Though I was a waitress, the customers were never rude to me,” Kim recalled. “They showed respect.” That feeling long resonated in her heart, especially after coming back to Korea to settle down.

When Kim attended a language institute in Japan to pick up Japanese, she met many people from diverse countries who had come to work there. Despite their lack of Japanese fluency, many actually landed jobs, which surprised her because the situation in Korea would’ve been unfathomable.

“Young people in Korea try hard to get employed, but Japanese companies actually struggle to hire due to a chronic shortage of labor,” said Kim.

Japan is in urgent need of employees. For every 100 job seekers, there are 152 available positions, in contrast to Korea, where there are only 62.

Bae, a philosophy graduate of Myongji University in Seoul, Bae once dreamed of working in Japan. A degree in philosophy wouldn’t land him a good job in Korea, he thought. He studied for the Japanese Language Proficiency Test (JLPT), and went to a job fair. He finally got hired at a Japanese hotel in Osaka in February 2013.

It didn’t turn out the way he imagined. He was informed he’d be working at the front desk as an office assistant, but when he arrived, he was given many other tasks, including working as a bellboy.

“I was embarrassed,” says Bae. “But I was a newcomer, so I worked hard. I was the only person who could speak Korean in the hotel, so when a Korean customer came to the hotel, I was completely in charge. But when a foreigner from another country came, I was back to handling miscellaneous chores.”

Bae’s workload increased day to day, unlike his salary. He was told he’d be promoted in a couple of a years. Being the only Korean in the hotel, Bae tried to behave because he thought he was representing the image of Korea.

He got along with other staff members. They invited him to their group chat on the messaging app Line. In springtime, they went out to see cherry blossoms. Ten months into the job, he was sure he’d integrated well.

It all changed in January 2014. Bae and his coworkers were set to meet. Bae texted his co-worker, asking for the location. The Japanese colleague sent him a screenshot of their group chat. His ID was saved as “Bae-chyong.” “Chyong” is a derogatory term for Koreans in Japanese. Bae was devastated.

“They were all kind to me at the hotel,” says Bae. “After finding out they were mocking me behind my back, I just couldn’t work in Japan any longer.”

Bae returned to Korea in March 2014, and in the summer of 2015, got hired at a local company in the grocery industry. Every time he struggles at his current job, he reminds himself of the moment he landed at Incheon International Airport from Osaka, putting his painful memories behind.