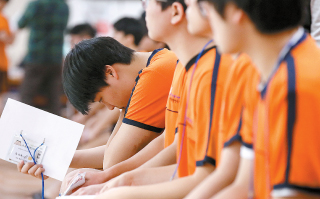 Young Korean men wait in line to receive a physical exam for mandatory military service. If they are given a grade 4, they may apply for public service instead. However, in recent years there have been many more applicants than positions available. [YONHAP]

In June 2016, a 22-year-old university student surnamed Choi was given grade 4 at his physical exam for Korea’s mandatory military service because of his short height of 158 centimeters (5 feet 2 inches). As a result, he doesn’t have to go to the regular military camp, but instead serve as a public service worker. However, for nearly two years, he has continuously been on the waitlist to get a position through his service.

“There are too many people on the waitlist with grade 4, so it seems I’m just going to keep on waiting,” he said, adding that it is delaying his graduation and job search.

Korea’s Military Manpower Administration opens the application of public service workers once a year between December and January. However, only about 20,000 positions are offered, while number of applicants increase every year by about 10,000, resulting in such a long waitlist.

According to the administration, 90,000 people are now waiting for positions as public service workers. By next year, the list is estimated to exceed 100,000.

In a report by Lee Chul-hee, a Democratic Party lawmaker, of the 52,510 people who applied for the public service worker last year, only about 19,077 people were given jobs. The remaining 33,433 people were put on standby, but only 29,977 of those people are expected to be given jobs this year.

The imbalance is caused by the Ministry of Defense’s policy of recruiting as well as civilians’ attempts to get out of military service, the lawmaker insists.

For example, one 22-year-old man in Seoul, surnamed Lee, is well and healthy. But he was able to avoid regular military service, as he deliberately received treatment at a mental hospital for seven months in an attempt to receive grade 4 at the physical examination. If an applicant submits a medical certificate saying he received mental health treatment for more than six months, he can automatically receive grade 4.

Certainly, a history of mental illness comes with other consequences, such as stigma when looking for a job. But Lee said he wanted to avoid the regular military service no matter what, “as he was afraid of going after listening to all the bad news of what happens inside the camps.”

“Adults who have been to the military say that I should get out of it if I can,” said Kim. “Since I can prepare to find a job and study as a public service worker, I really didn’t want to waste time in the military camp.”

The administration said they’ll add 10,000 new positions every year, but this doesn’t seem to be enough to accommodate the ever-increasing number of applicants.

In the National Assembly, lawmakers including Lee have proposed a bill to support the expansion of public service jobs. The main idea is to increase demand for public service workers, and to use the money that would have gone towards military service to instead pay the salaries, transportation costs and other expenses of public service employees.

However, others point out that given the upcoming population crisis involving a lack of young people, it is not good to expand the work force recklessly.