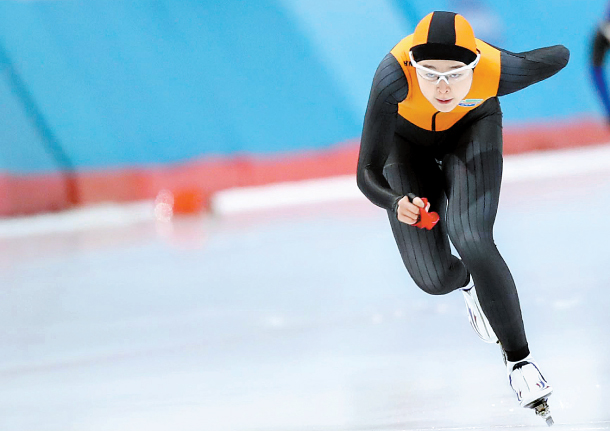 Two-time Olympic gold medalist Lee Sang-hwa plans to retire after the PyeongChang Winter Games, but in her stead will likely be Kim Min-sun, a rising star in the women’s 500-meter short-track event.

Kim, 19, started skating as a hobby at age 11, considered late in a country that has fine-tuned its national training program for speed skating down to a science.

“First, I skated once a week,” Kim said. “Then later, it became twice to three times and eventually, I became a competitive skater.”

Though she started competing later than others, Kim improved faster than others. In middle school, she was already outskating some older students and won gold in the women’s 500-meter event at the 2016 Winter Youth Olympics in Lillehammer, Norway.

At the 2017 Fall Classic Speed Skating meet in Calgary, Canada, in September, Kim broke her personal best as well as world junior record, clocking 37.70 seconds in the 500-meter event. The former record was held by none other than Lee at 37.81 seconds in 2007.

But Kim’s record was not officially recognized because the International Skating Union (ISU) failed to administer a doping test on her that day.

According to the competition’s regulations, skaters who break records must pass a drug test the same day in order to have their time recognized. Eventually, though, the ISU approved Kim’s record.

“I was disappointed at the time, but I was just happy about the fact that I exceeded the previous record,” she recalled.

“I learned the strengths of other skaters through the four World Cup races,” she said. “I think it has allowed me to advance one step further.”

Kim’s naturally strong leg muscles have also contributed to her success as a speed skater.

“She has an outstanding physique to fulfill the physical requirements of racing sprint distances,” said former Olympic speed skater Jaegal Sung-yeol, who is now a coach in Uijeongbu, Gyeonggi, where Kim trains. “She also seems to have a strong mentality.”

The Korean public is calling her “the second Lee Sang-hwa” and “post-Lee Sang-hwa.”

“It does feel nice,” Kim said in response to all the accolades she’s getting, “but I feel a bit pressured because I think the spotlight will be entirely on me after Lee retires.

“But I think right now, I feel more gratefulness than pressure.”

Kim attributed some of her skills to Lee because she was able to observe her mentor practice and naturally pick up some tricks. Kim trained with Lee for over three years.

“Although our skating styles differ a bit,” Kim said, “after watching Lee practice, I naturally became aware of some tricks.”

In her spare time, the young skater enjoys visiting museums, but on the rink, she’s fiercely competitive.

“She looks gentle, but she hates to lose,” Jaegal said. “Because she thought she couldn’t fully focus on sports if she went to college, she decided to join the professional team instead.”

Like Kim, Lee also chose to devote her time to speed skating at 19. At the 2006 Turin Games, Lee finished fifth, and though she performed above expectations, she shed some tears on her flight back because she was not fully satisfied with her performance.

Her perseverance allowed her to win gold at the next Winter Olympics in Vancouver.

Following the steps of her predecessor, Kim has a similar plan: focus on gaining experience rather than winning at the PyeongChang Games and stand at the top of the podium in the 2022 Beijing Winter Olympics.

“I dreamed of competing at the Olympics since middle school,” Kim said. “They say it’s different than other events. For now, my goal at PyeongChang is to finish in the top 10, but in four years, I’ll certainly win a medal.”