The Korean men’s ice hockey team got off to a shaky start in their Olympic preparation, losing to Kazakhstan 3-1 during a friendly match at Seonhak International Ice Rink in Incheon on Saturday. 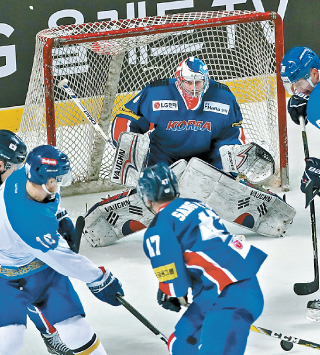 Korea, in blue and red, and Kazakhstan, in blue and white, face each other in a tune-up match at Seonhak International Ice Rink in Incheon. [YONHAP]

Despite Korea’s ranking, at 21, a few spots lower than Kazakhstan at 17, the loss was quite a disappointment as Korea played against Kazakhstan’s second division team.

The team, led by head coach Jim Paek, got off to a good start by taking the lead in the first period when there were less than six minutes remaining. Lee Don-ku, defense, scored Korea’s only goal, assisted by Kim Ki-sung.

Korea’s lead didn’t last long, as they allowed a goal to Kazakhstan’s Egor Petukhov just 3 minutes and 35 seconds into the second period. Then, Korea allowed another goal to Nikita Mikhaillis in the third period, with six minutes and 25 seconds remaining. Korea made a last-minute attempt to tie the match, but instead allowed an empty net goal to Kazakhstan’s Jaroslav Evdokima in the last 30 seconds of the game.

“We’ve got to find some positives and find some solutions on how we can get better,” Paek was quoted as saying on Yonhap after the game.

Despite Korea taking the lead throughout the game, they had trouble scoring. The team’s first line - Kim Sang-wook, Kim Ki-sung and Mike Testwuide - struggled to work as a team. Even Kim Sang-wook, who scored three goals and three assists during the Channel One Cup, failed to show his sharp side.

The defense made continuous mistakes, losing their focus.

At the International Ice Hockey Federation (IIHF) World Championship Division I Group A, Korea defeated Kazakhstan’s top team 5-2. At the time, Korea was losing 1-2 until the second period, but made an impressive comeback in the third period, scoring four goals. But the tune-up match was nothing like April, as the players seemed to physically fall behind Kazakhstan. It was only thanks to goaltender Matt Dalton that Korea was able to conclude the game down by just two goals.

The Kazakhstan team was comprised of mostly rookies playing in the country’s second division, except for five players. Making the loss even more of a disappointment, Kazakhstan players weren’t in their best condition as they had only arrived in Korea on Friday. However, Paek didn’t seem too discouraged, arguing that the team is heading in the right direction in preparation for the Olympics.

“They haven’t played a game in how long?” Paek was quoted as saying on Yonhap. “You have to keep practicing in games. We got to get into the performance zone. That was a good start tonight.”

This was Korea’s first game in 47 days, since the Channel One Cup on Dec. 16. After the Cup, the Korean ice hockey players were given a two-week break, and after that, they returned to Jincheon National Training Centre in North Chungcheong, to compete for their spot onto the final Olympic entry. From such a high level of training and long absence from playing in actual games, the team seemed to have lost their competitive edge.

“I don’t think we had our best effort tonight,” Dalton was quoted as saying. “Hopefully, we can build on this and keep getting better here before the Olympics start.”

Before the Games begin, Korea will play another friendly against Kazakhstan today at Seonhak International Ice Rink. The team will also play two more tune-up games, against 15th-ranked Slovenia on Thursday at Incheon and against second-ranked Russia, who will be competing as “Olympic Athletes from Russia,” on Saturday at Anyang.