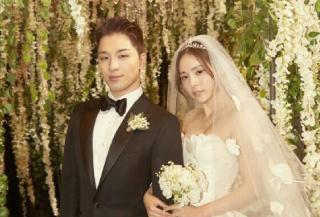 YG Entertainment said the closed-door wedding was held at a church in Anyang, south of Seoul, at 3 p.m., with singer Zion.T singing a congratulatory song.

Only a small number of their family members and acquaintances, including YG Entertainment CEO Yang Hyun-suk, attended the wedding, while a number of their Korean and foreign fans gathered outside.

The couple held a wedding party at the Paradise City hotel in Incheon, west of Seoul, Saturday evening, the agency said.

Taeyang called Min “the muse who inspires me” when he dismissed a breakup rumor last August.

The 29-year-old vocalist has also led a successful solo career, with hit songs such as “Eyes, Nose, Lips” and “Look at Me Only.”

The singer is expected to start his mandatory military duty sometime during the first half of this year.