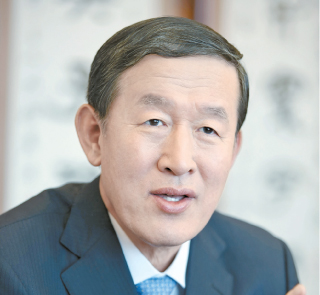 GS Group Chairman Huh Chang-soo asked the group’s new executives to continuously challenge everything and aim high to produce the best results for the company on Friday when he visited the new decision makers’ workshop on Jeju Island.

The group said that Huh held a banquet dinner with the new executives on Friday in order to deliver some of the preferable attitudes that leaders should have.

“To challenge and innovate amid an uncertain global economy” was his first request.

He told an anecdote of world-famous sprinter Usain Bolt overcoming scoliosis by strengthening the core muscles of his backbone and going on to win gold medals at three Olympics.

“Such a result wouldn’t have been possible if he hadn’t kept challenging,” Huh said. “Likewise, I request new executives write new history through challenging and innovative minds even if we are situated in an uncertain environment,” he added.

Huh told them to aim high, using ancient Chinese philosopher Xunzi’s words. He told them to “climb a high mountain” and “look down into a deep valley” in order to “comprehend the highness of heavens” and “depth of Earth.”

Responding to opportunities with agility was his last lesson to the group’s new decision makers.

“Executives are the faces of a company, and what you think and how you behave and speak determines the company’s public image,” said Huh.

“Voluntary participation in the company’s business and leadership in teamwork will result in visible outcomes,” he added.

Huh has been participating in such meetings since 2005, except for one time when he was abroad on business.