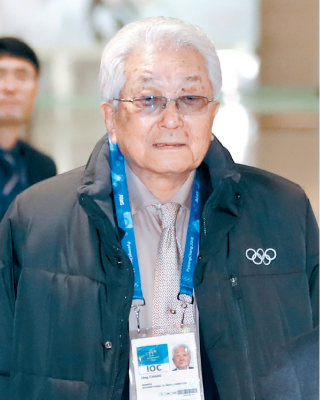 The 80-year-old, a former basketball player, struck a far more positive tone than last June, when he led a 36-member demonstration team from the International Taekwondo Federation, which included 32 North Koreans, into South Korea to participate in the World Taekwondo Championships.

During his June visit, Chang rejected South Korean President Moon Jae-in’s proposal for sports diplomacy, telling local reporters that stable political conditions between the two countries were a prerequisite, and that politics was “above sports.”

Chang, flying in from Beijing on Sunday, told reporters at Incheon International Airport that he hoped the joint women’s ice hockey team plays well and the PyeongChang Winter Olympics be held “very successfully.”
“As an IOC member,” he quipped, “I can’t say I wish the Olympics fails.”

Chang is expected to attend the 132nd IOC session from Tuesday to Thursday in Pyeongchang.

Pyongyang told Seoul last month in a high-level meeting that it would send senior government officials to the Games, but still hasn’t specified who they would be, or when they’ll arrive.

A Blue House official admitted Sunday that Seoul hopes the regime sends political bigwigs, adding that the “higher” rank he or she was in the regime, the better it would be for the South Korean government, given that it’s trying to use the PyeongChang Olympics to settle peace on the peninsula and create an environment for possible North Korea-U.S. dialogue.

Should the North accept the invitation, the IPC said they will march with South Korean athletes under a unified flag at the Paralympic Winter Games opening ceremony on March 9.