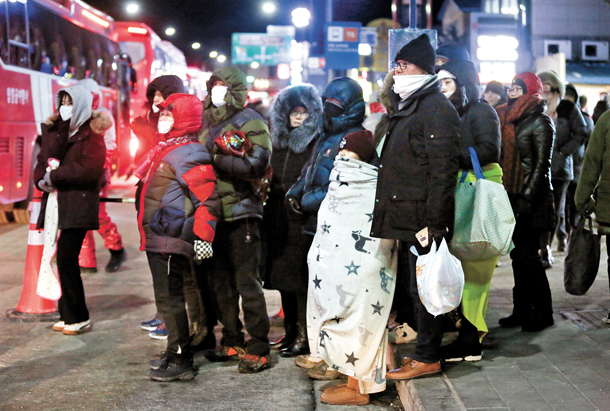 Olympic athletes and viewers may have to brace for the coldest opening ceremony in history at the Winter Games in Pyeongchang County, Gangwon, on Friday.

With temperatures expected to plummet below negative 17 degrees Celsius (1.4 degrees Fahrenheit), the Olympic organizing committee is pulling out all the stops - installing heaters under each seat and building an acrylic fence around the stadium to block the wind - to make the weather bearable.

Yet despite these efforts, some visitors who attended the opening ceremony rehearsal still suffered in the extreme cold.

Seoul resident Jo Hee-jin recounted her “freezing” experience at the rehearsal on Feb. 3 to a JoongAng Ilbo reporter.

Jo wanted to go to the opening ceremony, but after finding out how much the tickets cost, she decided to settle for the rehearsal instead.

“I thoroughly prepared for my trip,” said Jo. “I knew that they would hand out a set of items - blankets, hand warmers, feet warmers, seat warmers and ponchos - to endure the cold during the real opening ceremony, but I heard they weren’t providing them for the rehearsal.”

Jo bundled up for the rehearsal wearing four layers - a felt shirt, turtleneck, sweater, fleece zip-up, two pairs of long johns, leggings and pants. To top it off, she wore a long-padded coat that covered her legs.

But Jo didn’t stop there.

“I thought to myself that I could survive in the middle of Siberia with all this,” said Jo.

Taking the 4:30 p.m. KTX from Cheongnyangni Station in eastern Seoul to Jinbu Station in Gangwon, Jo arrived in Jinbu at 6 p.m. She rode the shuttle bus in front of the station and planned to find her seat in the Olympic stadium by 6:30 p.m.

But things didn’t go according to plan.

“It was the beginning of a nightmare,” said Jo.

“I lined up with several others at one entrance to the stadium,” Jo recalled, “but I realized it was the line for people working or volunteering for the ceremony.”

Jo didn’t have any luck at the next line either.

“This time it was a line for reporters only,” said Jo.

By that point, it was past seven and the temperature had fallen to negative 12 degrees Celsius, though Jo said it felt like it was well below negative 20 degrees Celsius.

“The biting wind stung so much that I felt like blades were cutting through my cheeks,” described Jo.

When she finally managed to find the right entrance, the line wouldn’t budge. Feeling frustrated, Jo asked a volunteer what had happened.

“The scanning machines froze and are not working due to the cold,” the volunteer admitted.

After a long wait, Jo finally set foot inside the stadium after 8 p.m.

Although Jo is not allowed to reveal specific details of the ceremony due to security measures, she admitted that she couldn’t really concentrate on the show because she was so worried about the performers in their thin costumes.

“The performers looked so pitiful dressed in such thin clothing,” said Jo. “But I was glad that their gig wasn’t too long.”

After the performance, Jo stopped by a food stand as visitors are not allowed to bring outside food into the venue. To keep herself warm, Jo bought fish cakes and hotteok, or fried pancakes filled with honey and nuts, at the stand.

But when she was ready to pay with her card, Jo realized the scanning machines were not the only thing that was frozen.

The next stop was the bathroom.

Though it was only a five minute walk to the toilet, Jo felt like it lasted forever due to the extreme cold.

Jo finally left the stadium around 9:30 p.m. and took a 15 minute walk to the free shuttle bus. By the time she arrived back at Cheongnyangni Station via the KTX, it was near midnight.

“I hope that everyone attending the opening ceremony on Friday makes thorough preparations before they go,” warned Jo.