The Philadelphia Eagles’ flight from last to first ended up with a Lombardi Trophy. 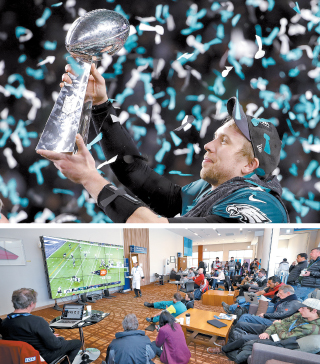 Above: Philadelphia Eagles quarterback Nick Foles holds the Vince Lombardi Trophy after winning the Super Bowl against the New England Patriots at U.S. Bank Stadium in Minneapolis on Sunday. Below: Journalists and Olympic officials watch the game at the press center in Pyeongchang County, Gangwon. [AP/YONHAP]

In a record-setting shootout between Nick Foles and Tom Brady, the backup quarterback led a pressure-packed 75-yard drive to the winning touchdown, 11 yards to Zach Etrz with 2:21 to go Sunday night. Then a defense that had been shredded throughout the second half made two final stands to win 41-33.

Brady got his team to midfield, but his desperation pass fell to the ground in the end zone.

The underdog Eagles (16-3), even injured starting quarterback Carson Wentz, came bolting off the sideline in ecstasy while Brady sat on the ground, disconsolate. It was the first Super Bowl title for Philadelphia (16-3), which went from 7-9 last season to the franchise’s first NFL title since 1960.

Super Bowl MVP Foles orchestrated the victory with the kind of drive NFL MVP Brady, a five-time champion, is known for. The drive covered 14 plays, including a fourth-down conversion.

“I felt calm. I mean, we have such a great group of guys, such a great coaching staff,” Foles said. “We felt confident coming in, and we just went out there and played football.”

The Eagles had to survive a video replay because Ertz had the ball pop into the air as he crossed the goal line. “If they would have overturned that, I don’t know what would have happened to the city of Philadelphia,” Ertz said. “But I’m so glad they didn’t overturn it.”

The touchdown stood - and so did thousands of green-clad Eagles fans who weren’t going to mind the frigid conditions outside U.S. Bank Stadium once they headed out to celebrate. But not before a rousing rendition of “Fly Eagles Fly” reverberated throughout the stands once the trophy was presented to owner Jeffrey Lurie. Later, fans danced along with the “Gonna Fly Now,” the theme from “Rocky,” the city’s best-known fictional underdog.

Then Foles made them forget Wentz - and least for now - with the gutsiest drive of his life, including a fourth-down conversion to Ertz at midfield. Foles has been something of a journeyman in his six pro seasons, but has been spectacular in four career playoff games. He finished 28 of 43 for 373 yards and three touchdowns.

It was such a wild game that Foles caught a touchdown pass, and Brady was on the opposite end of a Danny Amendola throw that went off his fingertips.

Eagles Coach Doug Pederson brought home the championship in his second year in charge. Belichick is 5-3 in Super Bowls and his teams have only a plus-4 overall margin in those games. So this one was in keeping with that trend: thrilling and even a bit bizarre. The press center at the PyeongChang Winter Olympics got in on the fun, throwing its own Super Bowl party Monday.

The International Olympic Committee, staff and journalists gathered on the second floor to watch the game.