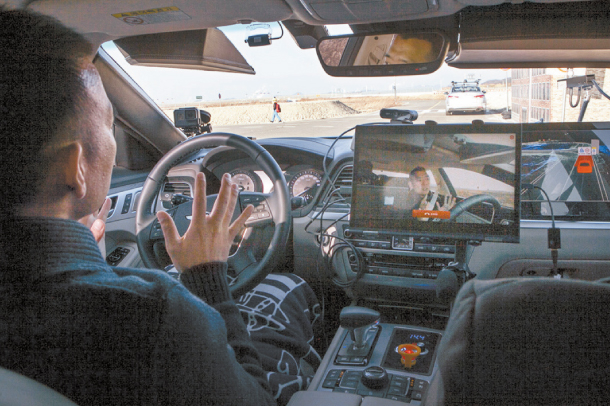 An SK Telecom employee tests a 5G-equipped self-driving car on Monday at the K-City testing ground in Hwaseong, Gyeonggi. [YONHAP]

SK Telecom and the Korea Transportation Safety Authority demonstrated two self-driving cars communicating with each other while driving based on a high-speed 5G network on Monday at K-City, a testing ground for self-driving cars newly set up in Hwaseong, Gyeonggi.

The demonstration was the next step towards putting 5G network-based self-driving cars on public roads by 2019, when the next generation network will be commercialized in the country, Korea’s largest mobile carrier said in statement.

For Monday’s demonstration, one car was provided by SK Telecom while the other was provided by the Korea Transportation Safety Authority, the operator of the K-City testing ground under the Ministry of Land, Infrastructure and Transport.

Rather than depending only on the cameras and sensors attached to the cars, the two vehicles communicated road conditions to each other, allowing them to safely drive through a 2-kilometer (2-mile) course, the mobile carrier said. 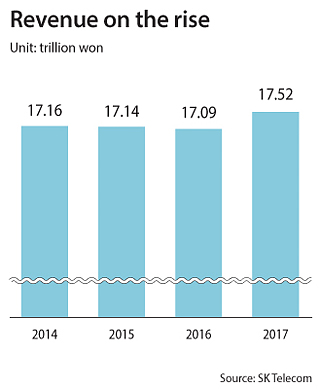 If the cars come across an accident the leading vehicle sends out an alert so the following car knows to slow down and change lanes before it reaches the scene of the crash. When the two cars approached an intersection with no signals from different directions, they were able to determine who should go first by communicating with each other.

A 5G connection is essential for such communication to work in real-time as the network boasts a low latency of 1 millisecond, helping cars to respond to different traffic situations almost instantly, according to the carrier.

SK Telecom and the Korea Transportation Safety Authority also unveiled a high-definition map that can provide self-driving cars with precise lane information and geographic features accurate to the centimeter level. The map can show the position of self-driving cars and monitor abrupt changes to traffic conditions due to accidents or construction in real-time so that vehicles can make instant decisions. Aiming to upgrade the map, the mobile carrier inked a partnership with Here Technologies, a leading provider of mapping data and navigation software, last month.

According to SK Telecom, 5G-based vehicle-to-everything technology and 3-dimensional high-definition maps can greatly reduce the accident rate of self-driving cars in cloudy weather or at night time when cameras or sensors may not work as well.

The mobile carrier is also strengthening the security of its self-driving technology by using quantum random number generating chips that can protect data from being hacked.

The chip generates unpredictable sequences of numbers, also called “true random numbers,” to protect computers and other internet-based devices from hacking. As self-driving cars depend on a reliable internet connection, hacking is thought to be the greatest threat to commercializing the technology.

“We are the first in the world to tap a quantum cryptography system to apply to self-driving cars,” said Park Jin-hyo, chief technology officer at SK Telecom.

SK Telecom’s 11-seater self-driving electric bus was also rolled out. The bus moves up to 150 kilometers on a single charge at a speed of up to 60 kilometers per hour, according to the carrier. Similar 5G-based buses were demonstrated by KT, the official partner of the PyeongChang Olympic Games, last year. The KT bus will drive the venue during the Olympics.