‘Black Panther’ creates a new world: The director and stars were eager to join a project that aims to make a cultural impact

‘Black Panther’ creates a new world: The director and stars were eager to join a project that aims to make a cultural impact 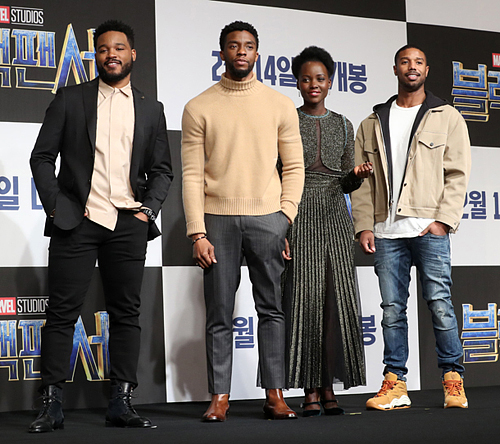 Ahead of the release of “Black Panther” in local theaters on Feb. 14, its director Ryan Coogler and the main cast held a press event in central Seoul on Monday. From left to right are Coogler and actors Chadwick Boseman, Lupita Nyong’o and Michael B. Jordan. [YONHAP]

Marvel’s superhero movies, including the “Avengers” franchise, have been hugely successful in Korea, and each new release seems to generate more buzz than the previous film.

But with “Black Panther,” the anticipation has reached new heights, as many local fans are curious to see how the film incorporates Busan, the southern port city where a number of scenes were filmed last spring.

The element is used to make Black Panther’s impenetrable suit that makes Tony Stark’s Iron Man getup look like an elementary school science fair project. The film also deals with the young king’s struggle over whether to maintain the nation’s isolationist policies to prevent the metal from getting into the hands of the outside world. 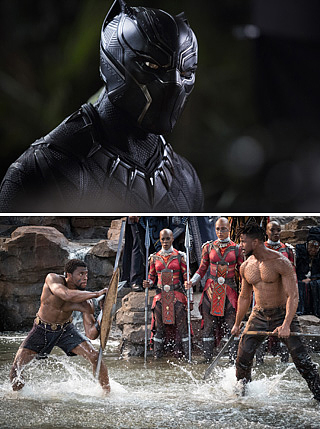 For filmmaker Ryan Coogler, who directed 2015’s “Creed,” the opportunity to merge part of himself with a superhero has been a “blessing.”

“Researching my own personal culture and inheritance has always been my interest since I was young,” the director said on Monday at a press event held in central Seoul. Coogler further explained that as “a huge fan of MCU [Marvel Cinematic Universe] movies,” it is “very surreal” for him to be part of this project.

For similar reasons, Boseman chose to join the film without any hesitation.

“I [have] never said ‘yes’ to any films without reading the script of a film. But I said ‘yes’ for the first time, not knowing the director and the cast,” said the actor. “I’ve never seen a film that has this type of cultural impact and has been so accepting.”

Every Marvel superhero has its own unique charm powerful enough to create fans across the globe. But its African hero is especially revolutionary in the sense that Black Panther finds himself at the center of the history of African empires, and the film combines the continent’s history with fictional elements.

“[Black Panther] is the leader of the most technologically advanced nation [Wakanda] on the continent [of] Africa. That is an extreme notion,” said Boseman.

The actor further explained how the Black Panther’s role both as a superhero and a leader reflects many real-life world leaders in that they have to make decisions and take the blame for their actions.

“But unlike a president or dictator, he can put on a suit and deal with the situation that most leaders will have to have a military deal with.”

Perhaps the strongest villain in the film, Jordan’s Killmonger is motivated by his desire to be understood by T’Challa. “Erik grew up in a system of pressure, and had lots of things taken away that he would have cared about… He wanted T’Challa to understand where he came from,” explained Jordan.

Other than the strong male cast, the film also boasts powerful female warriors, including Lupita Nyong’o’s Nakia, a War Dog spy for Wakanda and a potential love interest for T’Challa, who will surprise local moviegoers with her use of Korean in the upcoming flick.

“[Nakia] goes out to the world - to places like Korea - to gather information and send it back home,” said the actor of her role. “She has a very quiet sense of power. The fact she’s a spy makes her need to be subtle to have an impact without necessarily pulling attention.”

Regarding the romance with T’Challa, the actor added, “What I love about the relationship [between Nakia and T’Challa] is that it is not your average sweetheart story. They have a history and the fact that she’s a reliable ear for him and gives him counsel makes Nakia’s relationship with T’Challa refreshing.”

The first solo film for Black Panther, - who is also slated to join this summer’s superhero mash-up “Avengers: Infinity War” - will hit local theaters on Feb. 14. Rated 12 and above, it runs for 135 minutes.