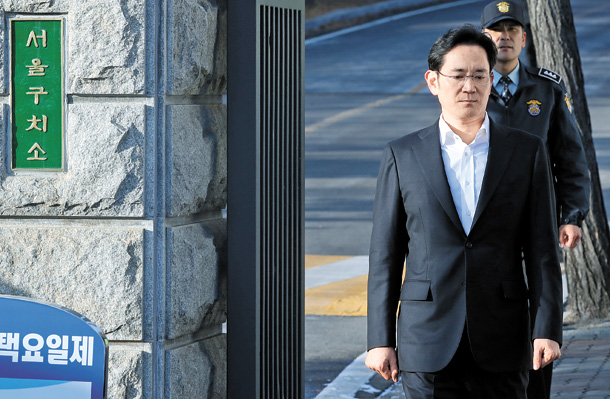 Lee Jae-yong, vice chairman of Samsung Group, walks out of the Seoul Detention Center on Monday after the Seoul High Court reduced his five-year prison term and suspended it. [YONHAP]

Lee Jae-yong, the de facto leader of Samsung Group, was released from prison after 353 days when an appeals court reduced a five-year prison term for bribery to a suspended sentence.

The Seoul High Court announced the verdict and sentence on Monday, overturning some earlier convictions. Although it upheld the conviction that Lee bribed Park Geun-hye when she was president, it ruled that he did so because Park demanded the bribes, and not because he was seeking favors from her administration.

As part of the presidential scandal that led to Park’s removal in 2017, the 49-year-old tycoon and four former Samsung executives were indicted in February 2017 for having offered or promised bribes to Park and her friend Choi Soon-sil.

The independent counsel, who investigated the case and prosecuted Lee, argued that he bribed Park through Choi in return for the president’s help in getting a state-run pension fund to exercise its voting rights to support a controversial merger in 2015, which cemented Lee’s control over Samsung.

While the Seoul Central District Court accepted the argument that bribes were offered in return for political favors, the high court rejected it.

“The main culprits of the scandal were former President Park, who shared her presidential powers with Choi, who held no public office, and Choi, who went after her gains based on the powers,” the Seoul High Court said in the ruling. “After all, this case is about former President Park, who had the highest political power, intimidating the management of the largest conglomerate, Samsung Group.”

The high court said Choi pursued her own gains using Park’s power. Lee and other Samsung executives failed to reject the demands of Park and Choi, although they were aware that they were paying bribes, the court said.

The high court reduced Lee’s five-year term to a sentence of two years and six months but immediately suspended it with a four-year probation period.

The court also reduced sentences of four Samsung executives, including Choi Gee-sung, former vice chairman of the Samsung Group, who once headed the powerful Future Strategy Office of the conglomerate and worked as Lee’s mentor.

After a local court issued a warrant for his detention on Feb. 17, 2017, Lee remained in state custody throughout an investigation, the district court trial and the appeals trial.

Independent counsel Park Young-soo, who acted as the prosecution in the case, indicted Lee on five charges. In addition to bribery, Lee was accused of embezzlement, illegal transfer of assets abroad, concealment of criminal profits and perjury at a National Assembly hearing.

In August, he was convicted of all five charges by the Seoul District Court. The high court, however, reversed four of the convictions and rejected the core of the independent counsel’s argument on the bribery charge.

“The independent counsel said it was a classic case of a cozy relationship between a politician and a businessman because Samsung gave bribes to Park and her confidantes in return for her help in the management control transfer,” the court said. “The district court ruled that it was an unethical tie between political power and capital.

“But this court has a different judgment based on the records of this case and various circumstances presented during the trials of the district court and this court. First, we cannot accept the key factor of the indictment that an illicit request was made tacitly on the issue of the generational transfer of management control.”

“We could not discover the typical cozy relationship between a politician and a businessman,” the court also said.

The court did maintain that Samsung’s fulsome sponsorship of equestrian training for Choi’s daughter Chung Yoo-ra was a bribe.

The high court reversed the embezzlement, illegal transfer of assets abroad, concealment of criminal profits and perjury at a National Assembly hearing convictions.

Lee’s sentence was reduced as the court convicted him of paying bribes totaling 3.6 billion won ($3.3 million). The independent counsel initially argued that Lee and Samsung leaders offered or promised 43.3 billion won. Acquittals on charges concerning embezzlement and illegal transfer of assets abroad also helped him, because they require heavier punishments.

Lee was released from the Seoul Detention Center, where he had spent almost a year, around 4:40 p.m. on Monday. “I am extremely sorry for having failed to show a good appearance to you,” Lee said. “The past one year was a very valuable time for me to look back on myself. From now on, I will pay more careful attention and work harder.”

Asked when he will return to management, Lee said “I have to go to see the chairman [Lee Kun-hee].” Chairman Lee, father of Lee Jae-yong, collapsed in 2014 with grave health problems.

Lee’s case will still go to the Supreme Court, as both his lawyers and independent counsel Park said they will appeal. Lee’s lawyers said they welcome and respect the high court’s “courage and wisdom” to clear their client of key convictions but still want to fight the bribery conviction.

Independent Counsel Park said the ruling was regretted. “We expected the court to show that justice is alive, but it is extremely disappointing,” he said. “We will appeal to continue our battle.”