Delegation from North to be led by its head of state

Delegation from North to be led by its head of state

North Korea’s Samjiyon Orchestra arrives today in the South on the Mangyongbong-92 ferry, pictured here in a file photo. [YONHAP]

North Korea has chosen Kim Yong-nam, technically its head of state, to lead a high-level delegation to the PyeongChang Winter Games this week, a sign that the regime is emphasizing pomp and ceremony at the international gathering instead of sending a nitty-gritty negotiator.

Officials from Pyongyang told their South Korean counterparts through the Panmunjom hotline late Sunday night that Kim would cross the border with three other delegates and 18 support staff, without providing any further names, according to the South’s Unification Ministry.

The group plans to stay in the South from Friday, when the Olympics kick off, to Sunday.

Kim serves as president of the Presidium of the Supreme People’s Assembly, North Korea’s rubber-stamp legislature, and is a member of the powerful Central Committee within the Workers’ Party. The 90-year-old climbed the ranks since the era of founder Kim Il Sung and is now ostensibly the second-most influential person in the North after Kim Il Sung’s grandson, leader Kim Jong-un. 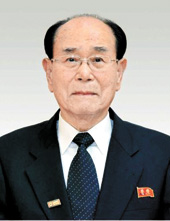 The Blue House, which had earlier said it hoped North Korea would send someone with heavy political influence, announced Monday in a statement that it “welcomed” the decision to send Kim Yong-nam to the Games, highlighting it was the highest-level government official Pyongyang has ever dispatched to the country.

By tapping Kim as chief delegate for the Olympics, presidential spokesman Kim Eui-kyeom said Pyongyang has shown to Seoul its “willingness to improve South-North relations and make the Games a successful event.”

On whether President Moon Jae-in would personally meet Kim in a one-on-one meeting, the spokesman said the Blue House was preparing “diverse opportunities of communication” between the two sides.

A senior Blue House official said on condition of anonymity that it was Seoul’s “hope and desire” that U.S. Vice President Mike Pence hold bilateral talks with the North Korean delegation when they convene in South Korea later this week, but that it couldn’t force the two sides together.

“We can try through indirect methods to create an atmosphere for them [to meet with each other and talk], but I don’t think any direct methods would work in this case,” said the Blue House source. The official added that he personally thought Kim Yong-nam suited the overall purpose of the Olympics given its “very formal and diplomatic nature, rather than a place where South and North Korea would hold very intimate discussions.”

A local government official said the North probably considered the fact that Kim wasn’t on any sanctions list, as opposed to Choe Ryong-hae, when choosing him. “If North Korea ever chose someone on the international sanction’s list, it would’ve severely damaged its reputation,” the official analyzed.

“There are some cases in which other delegates play a far more crucial role than the chief of a delegation,” he said, “so we’ll have to see how North Korea composes the rest of its group to precisely assess its intentions.”

Meanwhile, 23 members of the Samjiyon Orchestra, mostly technicians, arrived in South Korea on Monday to prepare for planned performances later this week in Gangneung, Gangwon and Seoul.

The Unification Ministry announced Monday that the rest of the 140-member troupe, including singers, dangers and musicians, will be landing in the South today on the Mangyongbong-92 ferry, which the North used in 2002 as well for a performance in the South.

Pyongyang, which previously said its Samjiyon Orchestra performers would take a road linking the two countries along the west coast, changed its plan last Sunday and told Seoul they would make a ferry ride to a South Korean port, according to the Unification Ministry. The performers will be using the ferry as accommodation throughout the entire week until they return back on Sunday, the ministry said, though which port they will land at has yet been decided.

The Mangyongbong-92 isn’t blacklisted under United Nations Security Council resolutions, but Seoul bans any North Korean vessel from sailing in domestic waters. Baik Tae-hyun, spokesman of the ministry, said local authorities were considering a special exemption. Winners of free tickets to the orchestra’s concerts will be announced this morning on Interpark, a ticket purchasing website that handled applications for the online lottery system. The Unification Ministry said Monday it decided to double the number of tickets given out for the Seoul concert, from 250 to 500, due to the event’s popularity.