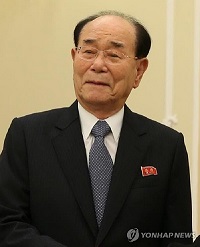 North Korea’s high-level delegation at the PyeongChang Winter Olympics will be led by Kim Yong-nam, the country’s nominal head of state, officials from Pyongyang told their South Korean counterparts through the Panmunjom hotline late Sunday night.

The North said the delegation will include three other delegates and 18 support staff members, though their names were not provided. The group plans to stay in the South from Friday, when the Olympics kick off, to Sunday.

Kim, 90, currently serves as president of the Presidium of the Supreme People’s Assembly, North Korea’s legislature, and is ostensibly the second-most influential person in North Korea after leader Kim Jong-un. In reality, Choe Ryong-hae, vice chairman of the Workers’ Party’s Central Committee, is known to be Kim Jong-un’s right-hand man.

South Korean President Moon Jae-in’s administration has been trying to use the PyeongChang Olympics to promote peace on the peninsula and create an environment for possible North Korea-U.S. dialogue.

The Blue House official did not give any names but said it would be “significant” if the North sent its “No. 2 or No. 3 figure after leader Kim Jong-un.”