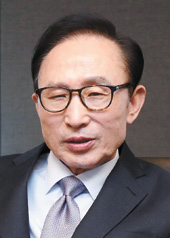 Former President Lee Myung-bak ordered the nation’s main intelligence agency to divert funds to the Blue House during his presidency, the prosecution said Monday as it indicted Lee’s key aide as an accessory to the alleged crime.

Kim Baek-jun, former general affairs secretary at the Blue House, was indicted on charges of receiving bribes and incurring losses to the state coffers. Kim, detained on Jan. 17, will remain in the prosecution’s custody.

In Kim’s indictment, the prosecution identified Lee as the principal suspect in the alleged misappropriation of funds of the National Intelligence Service (NIS), and said Kim was an accomplice. With that labeling, Lee is destined to face an investigation and probable indictment as the main suspect in the Blue House’s practice of misusing secret operations funds of the NIS.

The Seoul Central District Prosecutors’ Office said Monday that Kim was suspected of receiving at least 400 million won ($367,478) from the NIS on several occasions after May 2008. The payments started when Kim Sung-ho was heading the agency and continued during the tenure of his successor, Won Sei-hoon, the prosecution said.

In one of the alleged deliveries, Kim sent a presidential staffer to a parking lot near the Blue House in May 2008 to pick up 200 million won from a budget officer of the NIS.

Kim denied all charges in the first stage of the investigation, but his statement changed after he was taken into custody. He admitted having received the money after a cross-interrogation with the NIS official who was allegedly involved in the delivery. Kim reportedly told the prosecutors that he had kept the NIS funds and distributed the money to senior presidential secretaries and cabinet ministers as off-the-book cash gifts.

According to the prosecution sources, former NIS chiefs Kim Sung-ho and Won also admitted during the probe that they sent money to Kim Baek-jun at the request of the Blue House.

Another Blue House aide and NIS officials also backed the notion that Lee was not only aware of the misappropriations but also the main culprit, prosecution sources said. Lee, therefore, was identified as the principal offender in the five-page indictment of Kim, while Kim was identified as an accessory to the alleged crime.

“Lee told Kim in person that he should pick up the money sent by the NIS,” a prosecution official said. “Because Kim was not the principal suspect, but a helper, we indicted him as an accessory.”

Lee’s office issued a statement and said the former president had no knowledge of the NIS’s special operations funds. “While witnesses are giving conflicting statements, the prosecution went ahead and labeled a former president a primary suspect without confirming the charges with him,” it said, criticizing the prosecution for trying to humiliate Lee with a political probe.