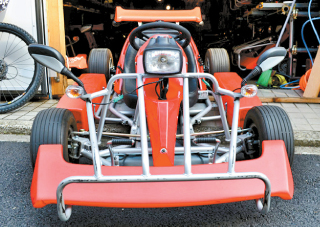 A photo of a go-kart from the official website of Rmaricar Garage Roppongi, a MariCAR franchisee.

Choh Eun-jeen was planning a trip to Tokyo this week with friends. One friend recommended they try a so-called Mario Kart, a trendy go-karting experience.

Choh, a producer at a home shopping channel in Seoul, searched online and found that Mario Kart had been featured on Korean entertainment shows. It looked fun: zooming around the streets of Tokyo in a go-kart while dressed as a Nintendo character.

Choh contacted MariCAR, the largest go-karting service in Tokyo, via Facebook and tried to reserve an hour-long program for 5,000 yen ($45.50). The company said it didn’t have that package and recommended Rmaricar Garage Roppongi, one of MariCAR’s franchisees.

What MariCAR didn’t tell the 26-year-old, however, was that she’d instantly be denied a reservation - because she was Korean.

Hours after Choh messaged Rmaricar Garage Roppongi on Sunday morning to place a reservation for three at 6 p.m. this Friday, the operator replied in English, “Sorry we can’t, please ask another branch.” When Choh asked for an explanation, the store said it refused to take “people like you,” meaning Korean customers, because they’ve caused “too much trouble.”

A Rmaricar Garage Roppongi worker who used the name Mcbee later told the Korea JoongAng Daily that it rejects all Korean customers due to “their driving license issue.”

“We had many car accidents only caused by Koreans,” the employee said. The accidents, the company believes, are proof that Koreans can get driver’s licenses even if they don’t know how to drive well.

In only two circumstances will the company provide services to Korean nationals: if they acquired their driver’s licenses in another country or if they work in Japan.

Choh contacted MariCAR and relayed her unhappy experience with Rmaricar Garage Roppongi. It apologized and said it would “make a protest” with the company.

“I will personally look into this horrible incident,” Paul Musashi, General Manager of MariCAR, wrote the Korea JoongAng Daily in an email. “I am terrified and shocked to learn that one of our franchise companies in Roppongi has rejected a customer due to [her] nationality.

“We have been blessed to entertain many tourists from South Korea over the years,” he wrote.

Choh ditched the go-karting plan and decided to visit the Mori Art Museum instead. She sees herself as a victim of anti-Korean sentiment in Japan.

In 2016, one Korean tourist complained of being served sushi with excessive amounts of stinging wasabi while in Japan because of his nationality. His complaint went viral.

“I never really liked or disliked Japan in any special way before this experience,” said Choh, who visited the country once over a decade ago on a high school field trip. “But I might refrain from visiting any areas in Japan in the future known to be hostile to Korean tourists.

“All I want is for the employee to sincerely apologize to me, and for the company to improve its services.”

What frustrated her even more is that she had nowhere to go to for help. The Tokyo Tourist Information Center, backed by the Tokyo city government, told Choh that it couldn’t interfere in her case, but would “share [her] unpleasant situation” internally at the center.

So did the Seoul office of the Japan National Tourism Organization when asked by the paper how it handles similar situations.

“It’s not like I’m seeking revenge,” Choh said while explaining her plans to spread her story as widely as possible, including a popular Facebook page in Korea that introduces tourist attractions. “It’s for the public interest.”