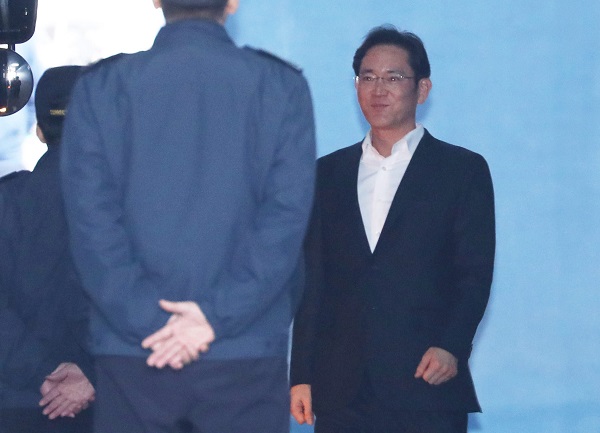 Lee Jae-yong, vice chairman of Samsung Group, walks out of the Seoul High Court on Monday after the court reduced a five-year prison term to a suspended sentence. [YONHAP]

Lee Jae-yong, the de facto leader of Samsung Group, was released from prison after 353 days after an appeals court reduced a five-year prison term for bribery to a suspended sentence.

The Seoul High Court announced the verdict and sentence on Monday, overturning some key points in Lee’s earlier convictions. In August, he was convicted of all five charges he was indicted on, including bribing Park Geun-hye when she was president, by the Seoul District Court.

The high court reduced the five-year term to a sentence of two years and six months but immediately suspended it with a four-year probation period.
The 49-year-old heir apparent, along with four former Samsung executives, was indicted in February for having offered or promised bribes to Park and her friend Choi Soon-sil.

After a local court issued a warrant for his detention on Feb. 17, 2017, Lee remained in the prosecution’s custody throughout an investigation, the district court trial and the appeals trial.

The high court ruled that although Samsung offered bribes to Park and Choi, it was not in return for favors. The court rejected an independent counsel’s argument that the bribes were in return for Park’s help in getting a state-run pension fund to exercise its voting rights to support a controversial merger in 2015 that cemented Lee’s control over Samsung Group.

“We could not discover the typical cozy relationship between a politician and a businessman,” the court said. “In this case, the highest political authority coerced a company to facilitate the offering of the bribes.”

The court did maintain that Samsung’s fulsome sponsorship of equestrian training for Choi’s daughter Chung Yoo-ra was a bribe.
In addition to the bribery charge, Lee was accused of embezzlement, illegal transfer of assets abroad, concealment of criminal profits and perjury at a National Assembly hearing. Although he was convicted of those charges in the district court trial, he was acquitted of them on Monday.