Jim Paek, the former NHL defenseman now coaching Team Korea, is fiercely protective of his players. Maybe all coaches are like that, but Paek has a way of letting people know in no uncertain terms that this is his team and these are his players. 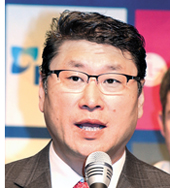 Korea shut out Kazakhstan 3-0, two days after losing to the same team 3-1. Despite this encouraging win - coming as it did only 10 days before Korea’s first game at the PyeongChang Winter Olympics - Paek was asked about his underperforming winger Brock Radunske.

After missing most of 2017 with a hip injury, Radunske returned to action in time to make the Olympic team. But the Canadian-born forward, who naturalized in 2013, made little offensive impact in those two games against Kazakhstan - this despite playing on the second line with two of the team’s most skilled players, Cho Min-ho and Michael Swift

Asked if he would keep Radunske on the second line, Paek reminded everyone of who was in charge.

“I don’t care what they say, he’s a very important part of our team,” Paek said. The second-line players “have good chemistry, and he plays with passion. I don’t know why people are so critical of our players.”

Paek also wondered aloud if people who were questioning Radunske were even qualified to do so. “Have they ever played hockey? That’s easy to say. I can say to you, ‘You haven’t written a good article. Should you be writing this article? Should you be doing this interview?’”

Another reporter asked Paek if he thought his first-line forwards had done enough in their past two games. Kim Sang-wook, Kim Ki-sung and Mike Testwuide were dynamic at the Channel One Cup tournament in Moscow in December but didn’t have much spark against Kazakhstan.

Paek argued that the three did other things well, and he also dropped subtle hints that people who make such criticism don’t know hockey.

“They played good defense, and they had no goals scored against them,” Paek said. “Hockey isn’t just, ‘You score, and you look.’ You have to win face-offs, you have to play defense and you have to backcheck.”

Paek has always taken umbrage at criticism of his team’s performance. He did the same last Saturday when it was clear that Korea simply didn’t have it against a Kazakh team that didn’t bring some of its top players.

Asked to comment about the state of his team, Paek only blamed the lack of game action. “They haven’t played a game in how long? If you don’t write or ask questions, you’re not going to think right, are you?” he said. “It’s the same thing.”