As the opening of the Winter Olympics approaches, organizers are increasingly concerned about low turnout at unpopular events, especially in a country largely unfamiliar with winter sports outside of speed skating. 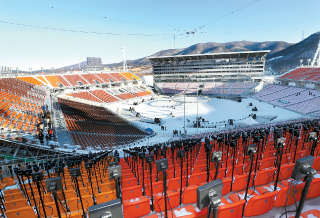 View of the PyeongChang Olympic Stadium in Gangwon on Jan. 12. The opening ceremony of the Winter Games will take place at the stadium on Friday. [YONHAP]

The city of Goyang in Gyeonggi bought 480 tickets at a cost of about 1 million won ($919.70) for the Korea-Canada women’s curling match, but the good deed might be in vain.

Goyang is about 230 kilometers (142.9 miles) away from the Gangneung Curling Centre in Gangwon, where the Olympics are being held. The match starts at 9:05 a.m. on Feb. 15, a Thursday. Not only will participants have to lose a day of work to go, they’ll have to get up well before sunrise to catch the bus to Gangneung.

The city government has no ability to enforce attendance, and with no incentive - or punishment - there will likely be no-shows.

Aside from long travel times, there are also concerns about safety and weather.

The district office of Yeonje in Busan expects to send 400 people to the Nordic combined events, but because they take place outside, visitors will need to withstand the harsh cold, which the coastal residents of Busan may not be accustomed to.

“We can’t help but worry about the cold temperatures for our residents,” a source from the Yeonje District Office said, reflecting the concerns of a majority of local governments.

In South Jeolla, some residents fear they may get into a traffic accident while traveling the 340 kilometers to Gangwon.

“If we take residents to events being held at night, bus drivers will have to drive back late into the night, raising safety concerns,” said an official from Changwon, South Gyeongsang, located about 137 kilometers from Gangwon, about a four-hour drive.

Based on data from past Olympics, about 20 to 25 percent of spectators, mostly holders of group tickets, do not show up to watch events. For the PyeongChang Olympics, about 40 percent of tickets were sold to groups. Those seats may well be empty when the Games come.

The concern about no-shows has become so dire that even Prime Minister Lee Nak-yon addressed the matter during a meeting with the PyeongChang Organizing Committee on Jan. 26 at the Central Government Complex in Seoul.

“With an increasing number of people who think the PyeongChang Olympics will be a success, ticket sales have finally reached 70 percent,” Lee said. “But only 7 percent of Korean people admit that they will actually go and watch the Olympics.

As a word of encouragement, the prime minister added, “Being granted the privilege to watch the Olympics in your home country is a once-in-a-lifetime opportunity. It is a blessing.”

The Ministry of Education is offering a 100,000 won grant to any student who applies to cover the cost of tickets, transportation and accommodations. About 190,000 students are eligible.

But some people feel offended that local governments are giving out tickets to unpopular events, which sell for less than 80,000 won.

“Local governments are basically using economically disadvantaged people as props for events that are unpopular,” one local official said, requesting anonymity to avoid backlash from superiors.

The PyeongChang Organizing Committee and Gangwon provincial government have a plan to fill stands with about 17,000 volunteers and members of the organizing committee to resolve the problem of no-shows.

The most cynical critics are questioning whether doling out group tickets violates election laws. They see the act as a mass appeal in hopes of getting re-elected come June, when legislative elections are held.