Between Kim and hard-line Trump

Between Kim and hard-line Trump 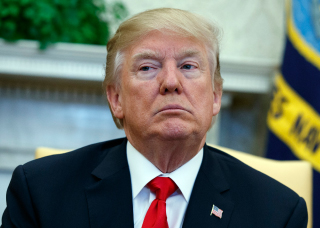 In his State of the Union address, U.S. President Donald Trump delivered a message of bipartisan cooperation to build “a safe, strong and proud America,” a departure from his other controversial speeches. He set five policy goals: spend $1.5 trillion to improve infrastructure; cut taxes and create jobs; reform the immigration system; sign mutually beneficial trade agreements; and strengthen the military.

In a CNN poll, 70 percent of respondents rated the address positively. The Wall Street Journal praised Trump for “acting presidential” at least for the day.

Koreans paid special attention to his policies on North Korea. While Trump was refined and well-mannered, he stressed the “depraved character” of the North Korean regime. He mentioned defector Ji Seong-ho and the parents of Otto Warmbier, the student who died after being released by North Korea.

Then, he underscored the nuclear threat to the U.S. mainland and the importance of maximum pressure on Pyongyang to avoid the mistakes of previous administrations. It seems not much has changed about his stance.

But the retracted appointment of Victor Cha to the post of U.S. ambassador to Seoul suggests a hard-line stance on North Korea by the Trump administration. Cha’s warning about the risks of military action led to the unprecedented withdrawal of his appointment.

The military option has become part of the Trump administration’s North Korea policy. As national security adviser H. R. McMaster has begun to seriously consider military action, Trump’s stance on North Korea seems to have shifted toward the hard-liners.

Now, the United States is worried about nuclear-tipped long-range missiles. After Mike Pompeo, director of the Central Intelligence Agency, mentioned that North Korea could achieve the feat within months, the regime’s relentless development of intercontinental ballistic missiles has become a red line for the United States.

Washington has two concerns: the potential threat of North Korea’s nuclear missiles to the U.S. mainland and anxiety of allies about their own security. This anxiety could undermine their confidence in the United States’ ability to protect them and weaken alliances.

Just as French President Charles De Gaulle wondered in 1960 whether the United States would sacrifice New York for Paris in a Soviet missile attack, the United States is concerned that such a situation could become a reality in the Asia-Pacific when North Korea completes its weapons development.

At the same time, Washington can use its strategic assets to deter any military retaliation. In its recent “Nuclear Posture Review” for 2018, the Defense Department suggested a “flexible response” by reinforcing tactical nuclear weapons that have been reduced since the Cold War. It shows the will to “substantially respond” to North Korea’s provocations by reinforcing and modernizing a low-yield nuclear capacity, the report said.

The South Korean government needs to prepare for different scenarios. First, Seoul should make efforts to facilitate talks between the United States and North Korea before the start of the PyeongChang Winter Olympics on Friday. It is necessary to consider ways to mediate the differences between Washington and Pyongyang.

At the same time, Seoul must also prepare for a rupture in such talks.

Moreover, the government must find ways to continue inter-Korean talks even when the annual military exercises between South Korea and the United States resume after the Olympics.

Seoul must strengthen its diplomacy to manage tensions in the peninsula following Washington’s hard-line stance and Pyongyang’s potential provocations.

*The author is a professor at the National Diplomatic Academy.