Korean markets plummet but then narrow their losses

Korean markets plummet but then narrow their losses 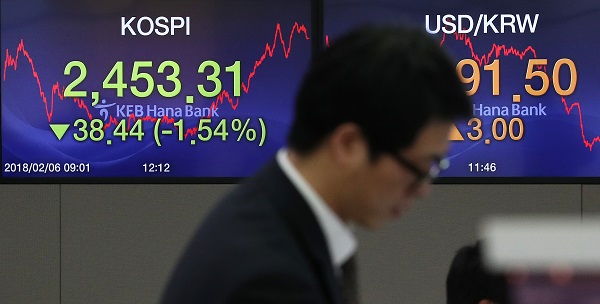 The junior Kosdaq plummeted more than 4 percent in the morning but recovered to decline 0.01 percent to end at 858.17.
Korea's representative implied volatility index (VKOSPI), which measures the volatility of the market, reached a two and a half year high, rising 56.16 percent as of 2:10 p.m.

Investors fear a more aggressive pace of interest rate hikes from the U.S. central bank, which could end an era of easy money for both companies and individuals.

Dow industrials slipped more than 1,500 points on Monday while the S&P 500 index dropped 4.1 percent.
“The reason for the market correction lies in the fear of faster-than-expected interest rate hikes by the U.S. Fed,” said Park Jung-je, an analyst at Meritz Securities.

The anticipated rate hikes also contributed to a pumping up of the yields of benchmark U.S. treasury bonds and government bonds around the world, making stock investments less attractive.

But Park noted that some correction was also taking place.
“The global stock markets performed too well in January and there was little volatility,” he said.

Yoon Chang-yong, chief economist at Shinhan Investment, echoed that view.
“The drop isn’t caused by anything fundamental,” he said, “nor is this related to credit risks or liquidity issues.”