Nexo offers a glimpse of the future

Nexo offers a glimpse of the future 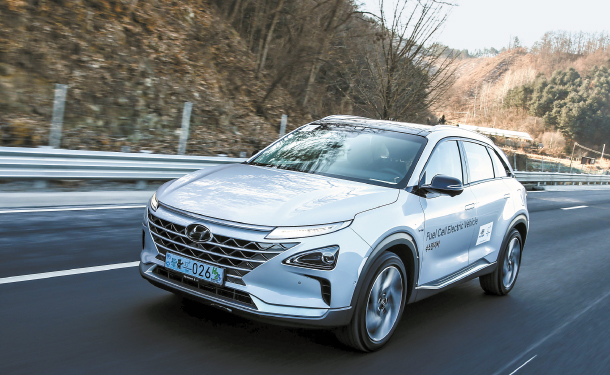 Hyundai Motor’s fuel-cell vehicle Nexo, which is able to drive 609 kilometers (378 miles) on a single tank, launches in Korea in March. [HYUNDAI MOTOR]

PYEONGCHANG, Gangwon - Hyundai Motor’s Nexo, its latest fuel-cell engine SUV and the result of more than two decades of research into hydrogen fuel, sets the tone for what the automaker considers to be the future of mobility.

Nexo is emission-free and full of the latest technology, but actually not that different from the vehicles people are used to driving.

When the Korea JoongAng Daily got behind the wheel of the fuel-cell vehicle on Monday to drive a 250-kilometer (155-mile) course from Seoul to Pyeongchang County, Gangwon, it felt the same as driving an internal combustion engine-powered vehicle.

But instead of the exhaust emissions that many engines generate, the Nexo discharged only pure water during its operation.

The vehicle can drive 609 kilometers on a single five-minute refill.

While driving a fully electric vehicle can feel noticeably different to a gas-fueled car - breaking and acceleration can seem too quick - the Nexo has no discernible differences. Even if the driver’s foot is not on the accelerator, the car doesn’t immediately come to a stop. Unlike in an electric vehicle, it slows down and speeds up gradually.

The engine doesn’t make noise, but the sound generated from the ground and the wind are noticeable enough to give some sense of how fast the car is going.

From stationary the car accelerates much faster than an internal combustion-engine powered vehicle, but at higher speeds its starts to fall behind.

To create a futuristic interior, the center console has been raised and features a grid of buttons leading up to the dashboard. Rather than a gear stick and a handbrake, all functions are controlled by buttons on the central unit. Hyundai Motor calls it a “floating center console.”

The design is not perfect, however, as the raised console does feel like a partition dividing the driver and passenger seats. The experience is more akin to the cockpit of a fighter jet than a regular car.

The back seat has abundant leg room. Length-wise, the Nexo is slightly longer than Hyundai’s Santa Fe.

The Nexo includes a number of advanced self-driving features.

It comes complete with Lane Following Assist, a system which controls the car’s steering wheel to keep it in the center of the lane, both on highways and metropolitan roads. The feature is not available in any other Hyundai model.

When changing lanes, cameras installed on the car’s rear instantly activate to show video of what’s going on in the next lane on the dashboard. Although the reporter looked at the side mirror out of habit, future Nexo drivers won’t need to turn their heads when changing lanes once they get used to the new technology.

The Remote Smart Parking system also proved useful. The car was able to park itself, as well as pull out of the parking space, when the reporter left the vehicle and pushed a button on the car’s key.

The Highway Driving Assist System (HDA) enables the car to drive on its own at a set speed. With the driver’s foot off the pedal and hands off the wheel, the Nexo accelerated and slowed down on its own according to the speed of other traffic on the road. When driving through an area with a speed limit, the car’s map system caused it to slow down to avoid a speeding ticket.

After receiving a government subsidy, the Nexo is estimated to cost around 40 million won ($36,836).

It will officially launch here next month.