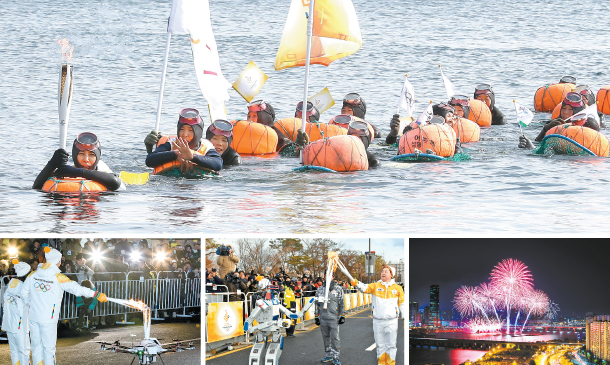 Clockwise from top: Haenyeo, the female divers of Jeju, hold up the Olympic torch at sea on the third day of the Olympic Torch Relay that began on Nov. 1. Hanwha’s fireworks during the Seoul International Fireworks Festival in September 2017 in Seoul. Dennis Hong, an American engineer, delivers the Olympic flame to a robot developed by a team of researchers at the Korea Advanced Institute of Science and Technology. KT employees light the flame on a torch carried by a 5G-powered drone in Gwanghwamun in central Seoul. [YONHAP, HANWHA GROUP]

The PyeongChang Olympic torch has traveled by land, sea and air, carried by celebrities, tycoons and even robots, but the biggest question is who will be the final torchbearer when the Winter Games open on Friday.

Rumors are circulating that Korean figure skating star Kim Yuna is the most likely candidate, though the committee might also go for a more unexpected wild card.

In the previous Olympics held in Korea, Seoul 1988, everyone thought Sohn Kee-chung, a gold medalist in marathon, would be the final runner.

But after the information was leaked to the media, Sohn only entered the stadium with the torch. For a while, it was unclear who would light the cauldron as the torch was handed over from one person to another.

They ended up lighting the cauldron, a surprise twist in a highly anticipated event.

Since the final steps of the torch relay are kept secret until the actual opening ceremony, an official from the PyeongChang Organizing Committee would only say that the last torchbearer “must be someone whose story is relatable to the international community” and declined to reveal any details.

It’s possible to narrow down the options based on who’s already carried the torch. High-profile athletes like speed skater Lee Sang-hwa, a two-time Olympic champion in the women’s 500 meters; football legend Cha Bum-kun; marathoner Lee Bong-ju, who won silver in the 1996 Olympics; and fencer Park Sang-young, who won gold at the 2016 Summer Games, have all already carried the torch. Celebrity torchbearers have included comedian Yoo Jae-suk and singer-actress Suzy.

But even this doesn’t help with the guesswork. After all, the final torchbearers at Seoul 1988 turned out to be ordinary folk. 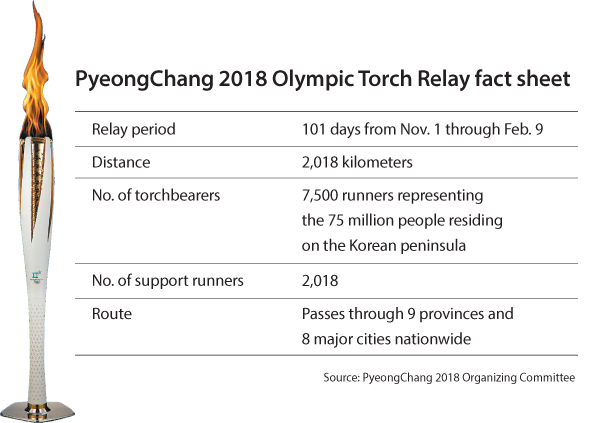 The Olympic torch was the product of Hanwha, an official partner of the 2018 Winter Games. It was designed to keep the flame alive throughout its 2,018-kilometer (1253-mile), 101-day journey around the Korean Peninsula.

The torch was designed to withstand weather as cold as negative 35 degrees Celsius (negative 31 Fahrenheit) and winds of up to 78 miles per hour, according to the Olympic committee. The committee said there were only three instances of the flame flickering during the first 50 days of the relay, but it hasn’t been keeping close track since.

“We have not been counting each incident,” an official from the committee said, adding that both the committee and Hanwha have largely been praised by the International Olympic Committee for their ability to keep the fire burning.

By comparison, at the 2014 Sochi Olympics, the flame went out 44 times during the 123-day torch relay.

The secret, according to Hanwha, is a four-wall combustion compartment that maintains the flame even under severe weather conditions. The torch has also been designed to allow gas to circulate inside and spread the heat.

Symbol-wise, the torch is covered in white porcelain to represent snow and ice. The bottom cap was made from metal pieces of barbed-wire fence from the demilitarized zone between North and South Korea.

Hanwha offered 9,640 torches for the relay, though only 7,500 runners were chosen for the relay. The rest were kept in case of accidents.

By robot and turtle ship

The torch was delivered and carried on multiple modes of transport, some more idiosyncratic than others. In Busan, the torch traveled on a yacht, and in Tongyeong, South Gyeongsang, it rode on a Korean turtle ship that was used by a revered admiral, Yi Sun-shin, to defeat the Japanese in the 16th-century Imjin War during the Joseon Dynasty.

In Daejeon, home of the Korea Advanced Institute of Science and Technology, the torch was carried by the university’s Hubo robot developed for rescue in disaster situations.

In Gwanghwamun, central Seoul, KT, a telecom company and official partner of the Olympic Games, offered its 5G-power drone for torch transport. The drone was specifically built for the torch relay. It flew from the southern part of Gwanghwamun Plaza to KT’s Gwanghwamun building, a journey of several minutes.

Since Korean telecom companies hope to commercialize 5G, the successor of LTE, before any other operators in the world, the participation of a 5G-powered drone was a show of KT’s progress in developing a high-speed wireless network.

The Olympic torch was not Hanwha’s only contribution to the Olympics. Hanwha spent 25 billion won ($23 million) to supply the torches and shoot fireworks 35 times during the Olympics. The largest performance will be at the opening ceremony.

Hanwha said it is using two times the amount of firepower for the PyeongChang Olympic opening ceremony compared to its annual marquee event, the Seoul International Fireworks Festival, though details are held secret because the event is part of the opening ceremony.